MI dominated in the league stage and then turned out to be an invincible force in the Qualifier 1 and Final. 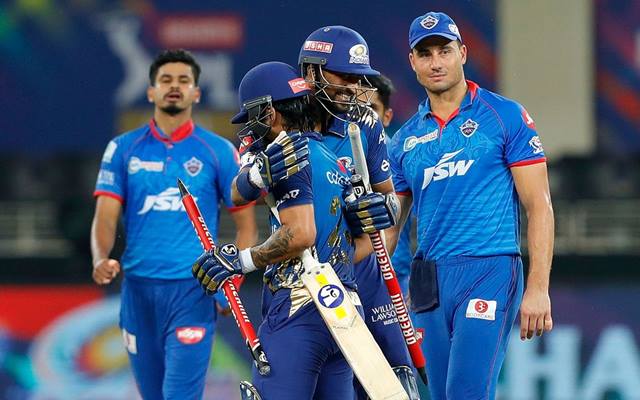 Mumbai Indians (MI) have ended their even year jinx in the Indian Premier League (IPL). After being the champions in 2019, Rohit Sharma and Co have successfully defended their title. In the final at the Dubai International Cricket Stadium, they beat the Delhi Capitals (DC) by five wickets.

The contest was a relatively one-sided affair as MI got over the finishing line with as many as eight balls to spare. After DC won the toss, they stuttered and on the back of Shreyas Iyer and Rishabh Pant’s fifties, could notch only 156 runs. In the run-chase, the Mumbai-based franchise didn’t have much trouble.

Their batsmen managed to score boundaries on a frequent basis, keeping the required run-rate in check. For the Capitals, they got the first taste of an IPL final and it wasn’t quite a great outing for them.

Here are the MI Player Ratings for the MI vs DC match:

Rohit Sharma was a tad of colour, but he put forth his A-game in the final. The right-hander smashed 68 runs off 51 balls with five fours and four sixes. Anrich Nortje got rid of the opening batsman.

Quinton de Kock started taking on the bowlers right from the word go. The southpaw smashed three fours and one six and scored 20 runs off 12 balls. Marcus Stoinis found his outside-edge to cut short his stay.

Suryakumar Yadav started his knock with a four and a six and looked in ominous form. To his dismay, he got run out as he sacrificed himself for Rohit. The right-hander ended up scoring 19 off 20 balls.

Ishan Kishan carried on with his good run of form. He came to bat half-way through the innings after Yadav’s dismissal. He stayed until the very end and scored 33 runs off 19 balls with three fours and one six.

Kieron Pollard didn’t have much to do in the game. He scored two fours before Kagiso Rabada castled him. With the ball, the pacer bowled only a solitary over where he gave away 13 runs.

Hardik Pandya came to bat with MI on the brink of victory. Yet he couldn’t stay unbeaten. Anrich Nortje bounced him out and Hardik perished after scoring three. He took a decent catch in the outfield though.

Krunal Pandya didn’t have the greatest of days with the ball in hand. The left-arm spinner leaked 30 runs in his three overs and managed only four dots. He was also hit for two sixes and one four.

Jayant Yadav was entrusted to bowl in the powerplay and he didn’t let his team down by any means. The off-spinner picked up the crucial wicket of Shikhar Dhawan and conceded 25 runs in four overs.

Nathan Coulter-Nile was pretty much on his mark. In his four overs, the lanky speedster conceded only 29 runs. Moreover, he nipped out the dangerous Rishabh Pant and also got rid of Axar Patel.

Trent Boult was stupendous upfront. He accounted for the wickets of Marcus Stoinis and Ajinkya Rahane to push DC on the backfoot. Then he returned to pick up the scalp of Shimron Hetmyer.

Jasprit Bumrah didn’t get a wicket, but he was fairly economical with the ball in hand. The right-arm speedster conceded 28 runs in his spell of four overs to go with eight dots. He was hit for three fours.