They will play their first game against Mumbai Indians on April 1.

Over the last few years, Sunrisers Hyderabad (SRH) have been one of the consistent teams in the IPL. There’s been a lot of spotlight on the success of the likes of Chennai Super Kings (CSK) and Mumbai Indians (MI) and the inability of Royal Challengers Bangalore (RCB) to step up. However, there’s barely anyone talks about SRH.

They won the IPL title in 2016 and that was after finishing third on the points table and they are the only team to do so. They reached the playoffs in 2017 and 2019 as well while they ended the league stages at the top of the table and reached the final in 2018. And will be hoping to finally lay their hands on the trophy for the second time.

For the 2020 season of the IPL, they have filled up all their 25 slots. SRH bought seven players in the auction but they hardly made any big bids. They bought the India Under-19 skipper Priyam Garg along with domestic talent Virat Singh. They also added the likes of Mitchell Marsh and Fabian Allen as international recruits. Thus, they will be on the hunt for their second IPL title.

SRH kick things off with a home game against MI

SRH start their 2020 IPL campaign on April 1. It is a home game and Mumbai Indians (MI) will be the opposition. They will be on the road for the next couple of games as they travel north and south in the span of three days as they head to Mohali first (on 4th April) and Bengaluru (on 7th April) next before returning to home shores on the 12th of April as they play Rajasthan Royals (RR).

They remain at home for a couple of successive games before a string of away games on 19th April in Chennai and 21st April in Jaipur. The 2016 IPL champions will stay in Hyderabad for the last week of April as they host Delhi Capitals (DC) and Chennai Super Kings (CSK) in back to back home matches before they finish with alternating home and away games with their last home game being on the 12th of May against Kings XI Punjab (KXIP) and their last league encounter on 15th of May against Kolkata Knight Riders (in Kolkata). 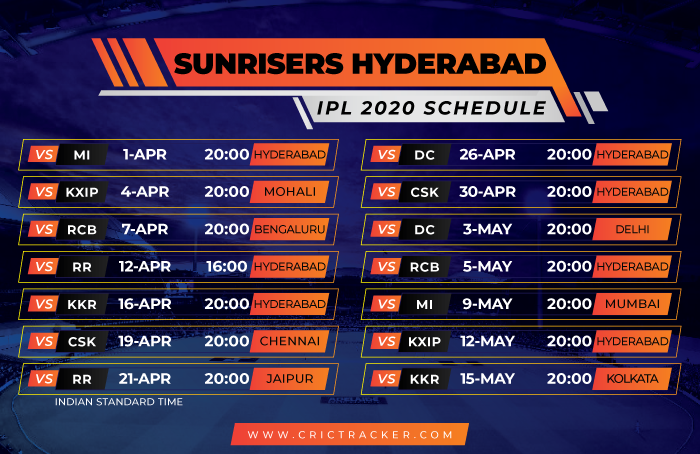