Mahela Jayawardene has confirmed that Rohit Sharma will start as an opener with Quinton de Kock.

The much-awaited 2020 edition of the Indian Premier League (IPL) kicks off on Saturday with the arch-rivals of the league, Mumbai Indians and Chennai Super Kings clashing off. The most successful teams of IPL will be locking horns at the Sheikh Zayed Stadium in Abu Dhabi which has quite big boundaries. Super Kings won’t be having the services of Harbhajan Singh and Suresh Raina while the defending champions will miss Lasith Malinga who bowled the last ball of the previous edition.

The opening pair conundrum for MI:

Mahela Jayawardene, the MI coach has confirmed that Rohit Sharma and Quinton de Kock will start the tournament as openers. Unfortunately for the Mumbai franchise, the pairing of Rohit and Quinton at the top is a pretty bad one especially in UAE where spinners are expected to hold the key. Over the last two editions of the IPL, skipper Rohit averaged just 13.3 against spinners in the powerplay, less than half of his average against pacers at the same time.

On the other hand, De Kock has averages of 55 and 39.7 in the powerplay against pace and spin since 2018 but his strike-rate against the slow bowlers is quite poor. The South African strikes at just 106.3 against the spinners compared to 142.9 against the quicks. This could cost MI in the longer run if one of them doesn’t act as a shield for the other once the spin dominance reaches the peak. Suryakumar Yadav for Rohit Sharma or Ishan Kishan for Quinton de Kock are the best options for MI to solve this muddle. Mumbai Indians have preferred to be playing with two overseas pacers which have been the talking point of their title wins. While the tournament’s build-up has been around the spinners, MI surprised everyone by signing James Pattinson in place of Lasith Malinga who was added to their overseas pace tank of Mitchell McClenaghan, Trent Boult and Nathan Coulter-Nile.

McClenaghan has been part of MI ever since 2015 while Coulter-Nile hasn’t played in the league since the 2017 season due to injuries. Trent Boult is the other pacer whom MI roped in ahead of the 2020 IPL. The left-arm pacer seems to be the first choice option for Mumbai Indians which apparently doesn’t seem to be a great decision. 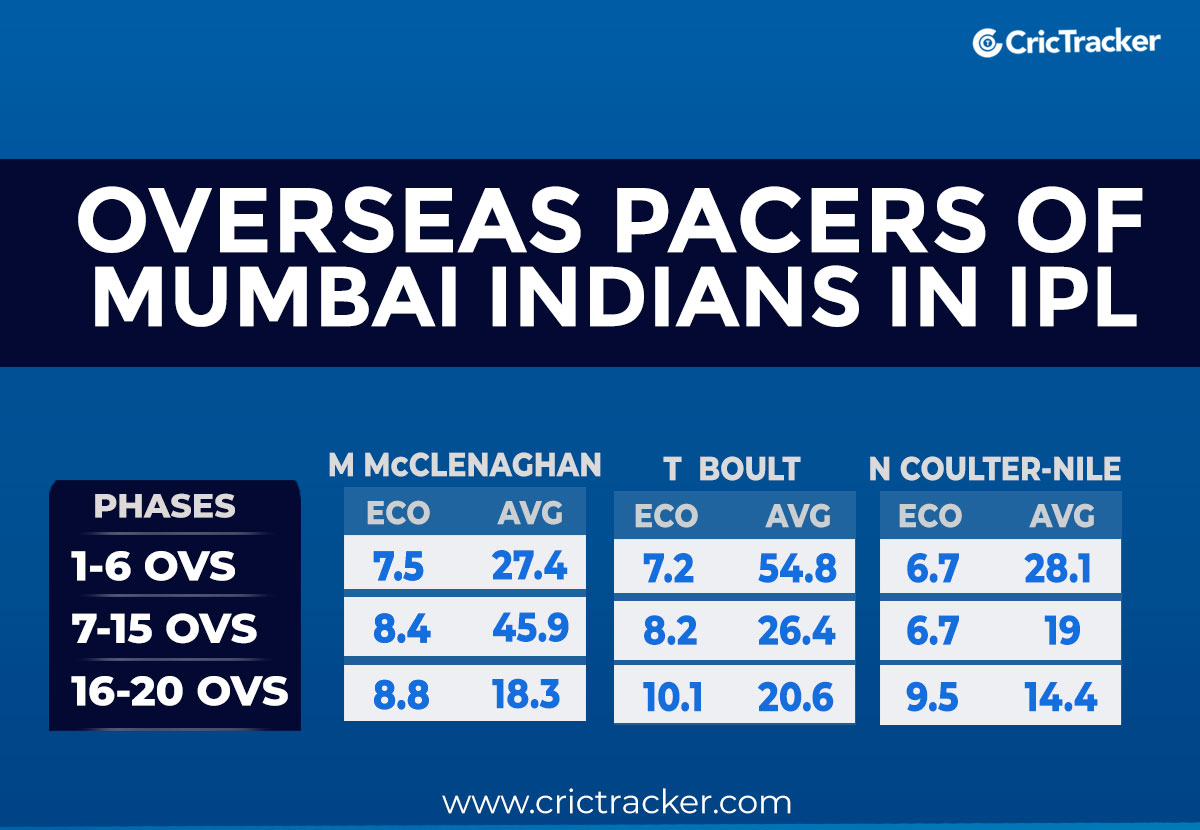 Boult averages over 50 with the ball in the first six overs in IPL history and gets hit for 10+ economy rate at the death (16-20). McClenaghan averages 27 in the IPL powerplays while Coulter-Nile has an economy below seven in the first 15 overs. Hence, the pairing of McClenaghan and Coulter-Nile should be a fruitful one for the MI team.

Can CSK hold on in the death overs?

The major threat Chennai Super Kings will have to face on Saturday will be a power-pack performance in the death overs by the Mumbai Indians. The likes of Hardik Pandya and Kieron Pollard were among the top hitters during the last edition. Hardik, especially, struck at 196.7 strike rate and averaged 37.1 in the last five overs. Pollard is fresh off a proper warm-up in the CPL despite the tracks weren’t in his favour. 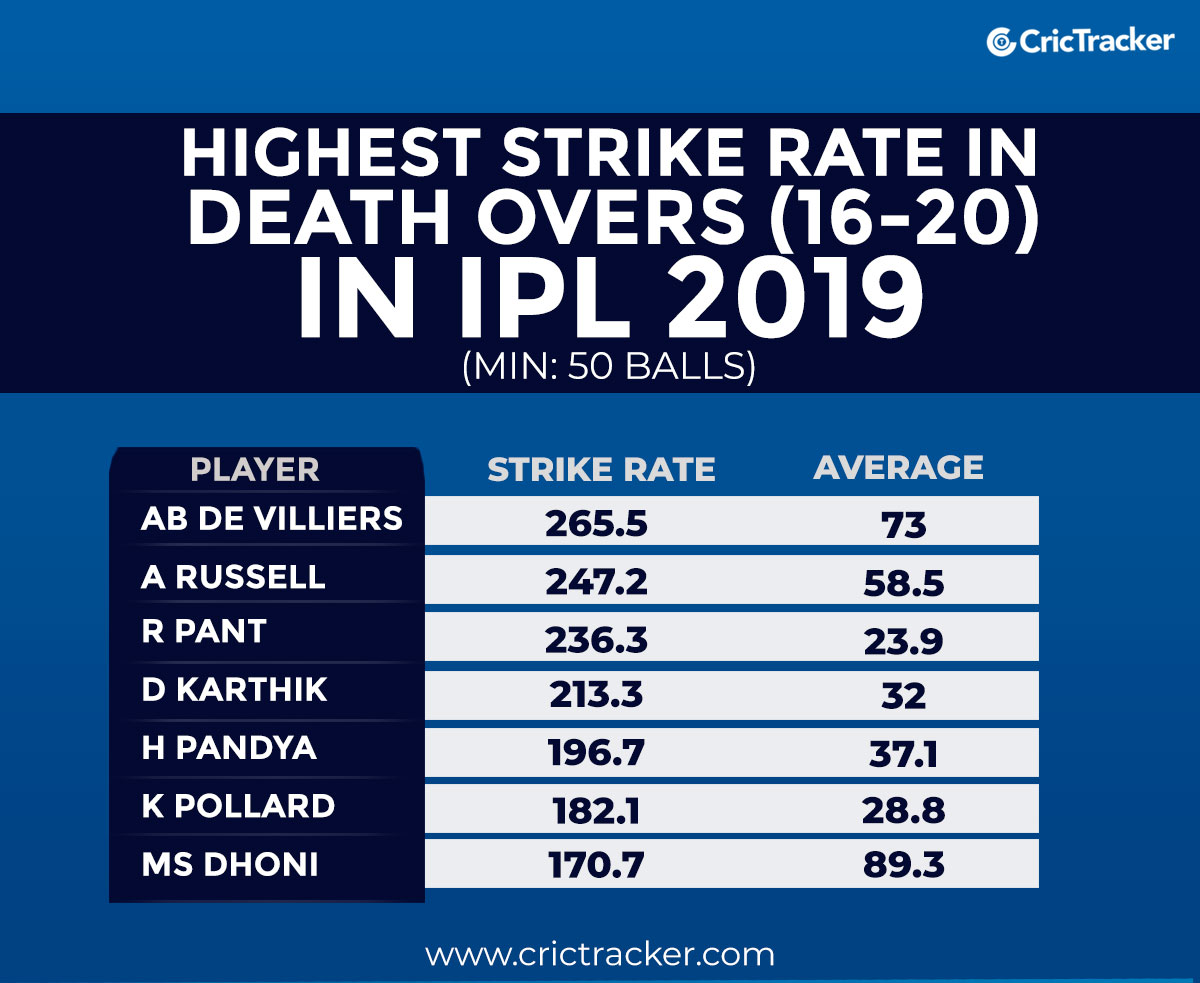 The last couple of seasons have been decent ones for CSK in death overs while Deepak Chahar did exceedingly well in this period conceding at an economy below eight in 2019. Dwayne Bravo, like every season, conceded at an economy rate over 8.5 in IPL 2019 but could be replaced by Lungi Ngidi for the first match. The South African pacer missed the 2019 season but when he played in 2018, he conceded only 68 runs in 66 balls bowled and also took four wickets in the death overs.