Suryakumar Yadav and Quinton de Kock struck fifties during the MI vs DC on Sunday.

An all-round performance by Mumbai Indians saw them become the first team to chase a target against Delhi Capitals in IPL 2020 by chasing down the target of 163. Quinton de Kock was awarded the man of the match in MI vs DC but as per the CricTracker’s Match Impact Ratings, the knock played by Suryakumar Yadav hold higher impact. De Kock took the charge in the 4th over but lost his opening partner Rohit Sharma in the following over. Mumbai’s run rate was little above six only when Surya arrived at the crease.

Quinton de Kock took more strike and hit 53 off 36 balls smashing seven boundaries before falling in the 10th over. Thus, the South African earned an impact rating of 9.24. Later, Suryakumar hit the accelerator and got an even quicker fifty and earned an impact of 11.1; the best among batter in MI vs DC. The Mumbaikar struck a 32-ball 53 before he got out to Kagiso Rabada in the 15th over. By then, the required rate came down to 6.5 as Surya added 53 for the 3rd wicket with Ishan Kishan in only 31 balls. 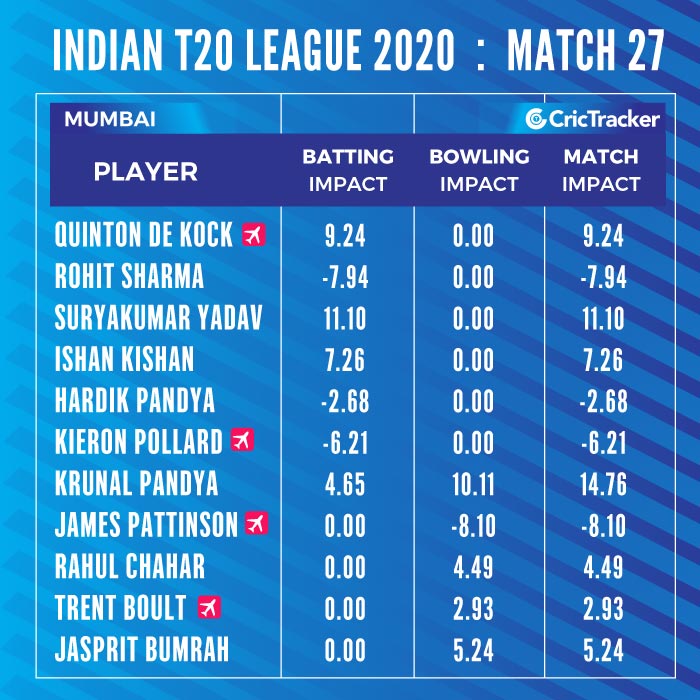 Mumbai Indians seemed to have taken lessons from the late collapses in chases and showed early aggression. Ishan too perished in search of quick runs as he scored 28 from only 13 deliveries. The equation came down to 11 off 15 balls when Krunal Pandya entered the crease who struck two fours in the final over to finish off the match. Though the younger Pandya bagged a duck, the senior Pandya returned the highest impact rating in the MI vs DC with 14.76 (10.11 with the ball and 4.65 with the bat).

Krunal got the wickets of Ajinkya Rahane and Shreyas Iyer in his four overs which cost only 26 runs. Kagiso Rabada was once again the most impact performer for the Delhi Capitals whose two wickets came at the cost of just 28 runs. The Proteas pacer got an impact of 7.61 for his efforts with the ball. Shikhar Dhawan, who top-scored in the MI vs DC with an unbeaten 69 off 52 balls, almost got a zero impact rating. Despite batting for full 20 overs, Dhawan scored runs at a strike rate of 132.69 only. 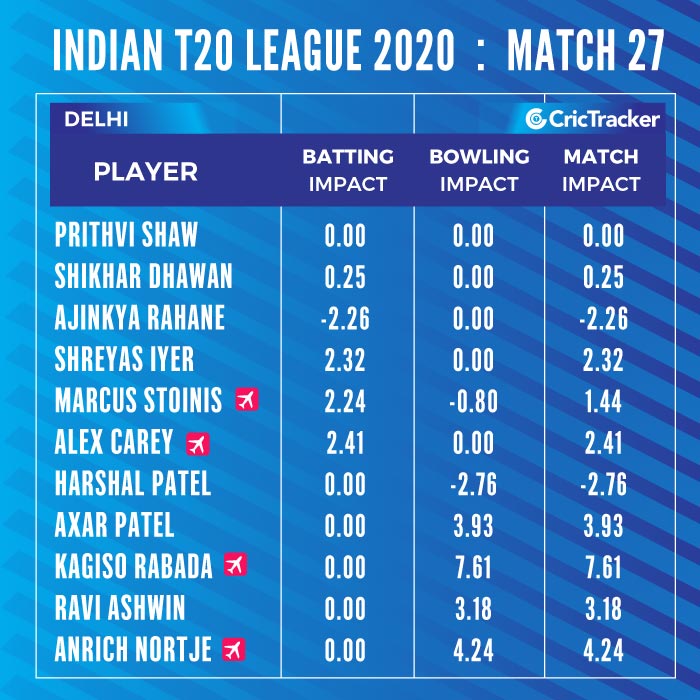