The Sunrisers made the playoffs in the last four editions, including winning the title in 2016.

Sunrisers Hyderabad (SRH) would be going into the 2020 Indian Premier League (IPL) on a positive frame of mind. The Orange Army made the playoffs in the last four seasons, winning the championship back in 2016. This year, David Warner and Co are set to start their campaign against the Royal Challengers Bangalore (RCB) on Monday, September 21 at the Dubai International Stadium.

As far as their rivalry is concerned, there’s not much to separate them. For the Challengers, led by Virat Kohli, challenging road lies ahead. Having not made the playoffs in the last three seasons, RCB would be under some pressure. In the auction, they did manage to rope in a few big names, and Adam Zampa joined them as well. However, all it matters is producing the goods on the pitch.

The pitch in Dubai has mostly been good for batting. Scoring runs in the powerplay can turn out to be crucial for both the teams. Spinners are mostly likely to come into play, especially after the field spreads out. Being a night-game and the dew factor in mind, teams can field first after winning the toss. The conditions are expected to be hot with the temperature around 35 degrees Celsius.

Playing Combinations for SRH vs RCB

David Warner, without a doubt, has been the most prolific foreign batsman in the history of the IPL. Irrespective of what the conditions are, the left-hander has churned out runs. Having won the Orange Cap quite a few times, he is again expected to be at his best. Warner is up and running as well after the COVID-19 pandemic after playing in the ODI and T20I series against England.

Virat Kohli is someone, who doesn’t resort to high-risk strokes and rather prefers to grind it out in the middle. Playing since 2008, he is the leading run-scorer for the Challengers and in the IPL’s history with over 5,000 runs to show for his efforts. He also has five centuries to his name, four of which came in 2016 when he nearly scored 1,000 runs in a single edition of the T20 tournament.

This will be the first time when the two teams will play against each other outside India.

The prediction is for Sunrisers Hyderabad to win the match. 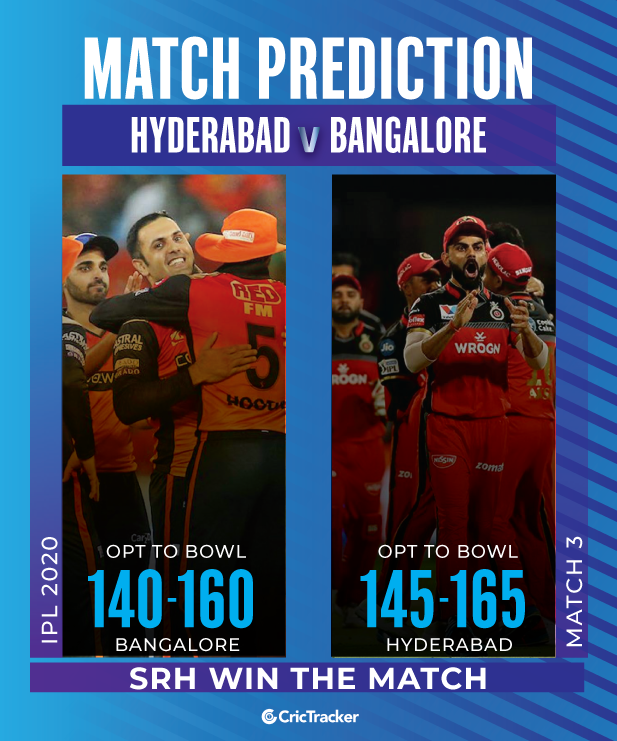