AB de Villiers smashed his 4th half-century of IPL 2020 to guide RCB to their 6th win.

Royal Challengers Bangalore registered their highest chase against Rajasthan Royals in the IPL by chasing down 178 to win a thriller on Saturday afternoon. It was also the 2nd highest successful chase outside Sharjah in IPL 2020. The chase was all about AB de Villiers and his finishing as he was the only RCB batsman who earned positive impact rating as per CricTracker’s Match Impact Ratings in RR vs RCB. The South African smashed as many as six maximums and a four on his way to an unbeaten 55 from only 22 balls.

This helped AB de Villiers earn an impact of 29.06 which is at least 10 more than any other player’s impact during the RR vs RCB. Devdutt Padikkal (-12.18) and Virat Kohli (-2.11) put on 79 for the 2nd wicket but the duo was well behind the required rate ending up earning a negative impact score. Jofra Archer failed to tame AB de Villiers and continued his poor form at the death in this IPL. The pacer earned a negative impact of -3.44 with the ball extending to -5.76 during RR vs RCB for his batting during the 20th over. 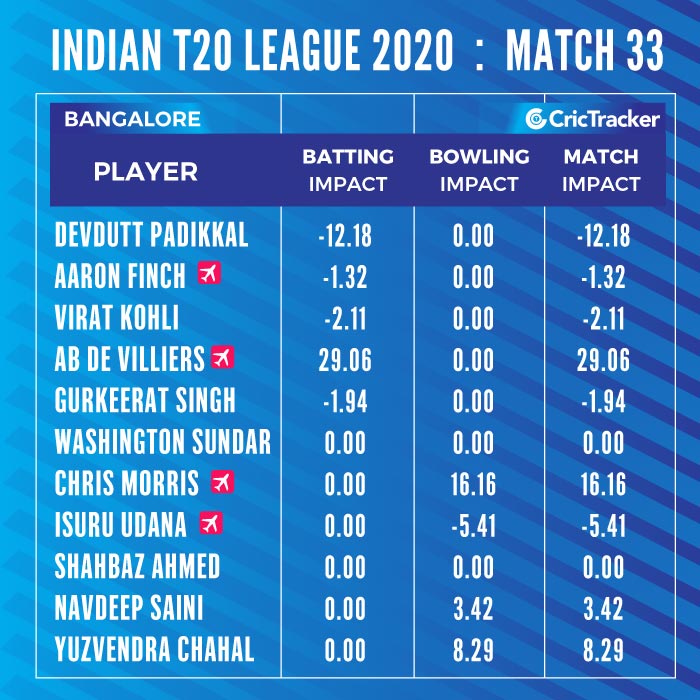 Kartik Tyagi was impressive with the ball as he dismissed Virat Kohli to earn an impact rating of 5.76. Robin Uthappa got back to the opening spot which is his best position and soon a difference was seen in his performance. The Karnataka batsman made most of the field restrictions smashing seven fours and a six during his 22-ball knock which yielded 41 runs. This inning of Uthappa got an impact rating of 12.71 which is only behind Steve Smith’s 13.88 for the Royals during RR vs RCB.

The Rajasthan Royals’ captain Smith scored 57 from only 36 balls towards the end by hitting six fours and a six. The Royals came close to the total of 180 only due to Smith’s knock after a middle-overs collapse. Chris Morris has become a lethal option for the RCB team as he dismissed all the four batters in the Royals’ lineup. Morris ended up producing the most impactful bowling effort as his 4/26 got him 16.16 while Yuzvendra Chahal earned 8.29 for the double strike during his first over of RR vs RCB. 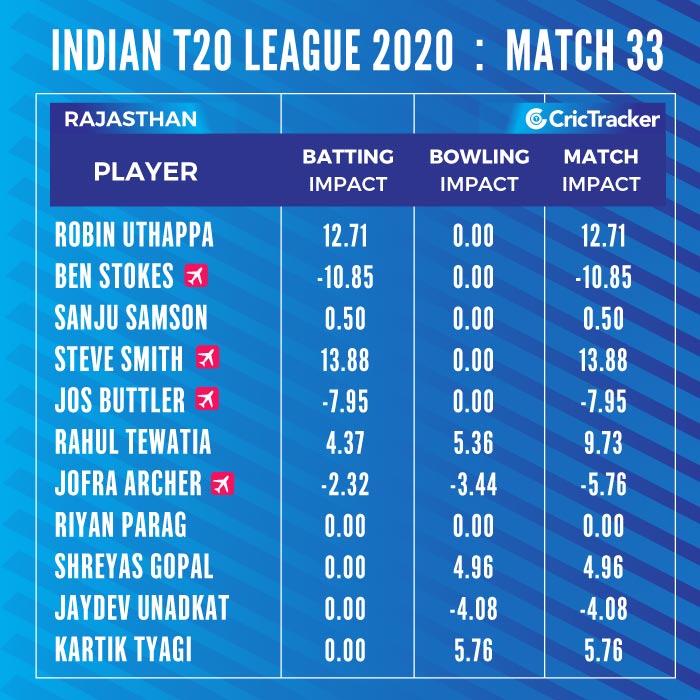