Axar Patel smashed 21 runs in the five balls he faced with the help of three maximums.

Delhi Capitals returned to the top of the table as they chased down the target of 180 during a thriller against Chennai Super Kings. The win was never possible without Shikhar Dhawan’s maiden hundred in Twenty20 format which was the most impactful performance of DC vs CSK with a rating of 19.52 as per CricTracker’s Match Impact Ratings. Shikhar did not get enough support from his team’s top four as only 31 runs from 35 balls came from the likes of Prithvi Shaw, Ajinkya Rahane and Shreyas Iyer; who all earned a negative impact rating.

Marcus Stoinis (+7.66) tried to take the pressure of Dhawan smashing 24 from 14 balls during their partnership of 44 runs in 4.1 overs. Axar Patel took the charge in the final over smashing three sixes in space of four deliveries to wrap up the chase in style. Axar’s unbeaten 21 off five balls got an impact rating of 12.77 which was only behind Shikhar Dhawan for the Delhi franchise. The left-arm spinner bowled a key spell conceding only 23 runs in his four overs while all other spinners conceded at 10+ economy during DC vs CSK. 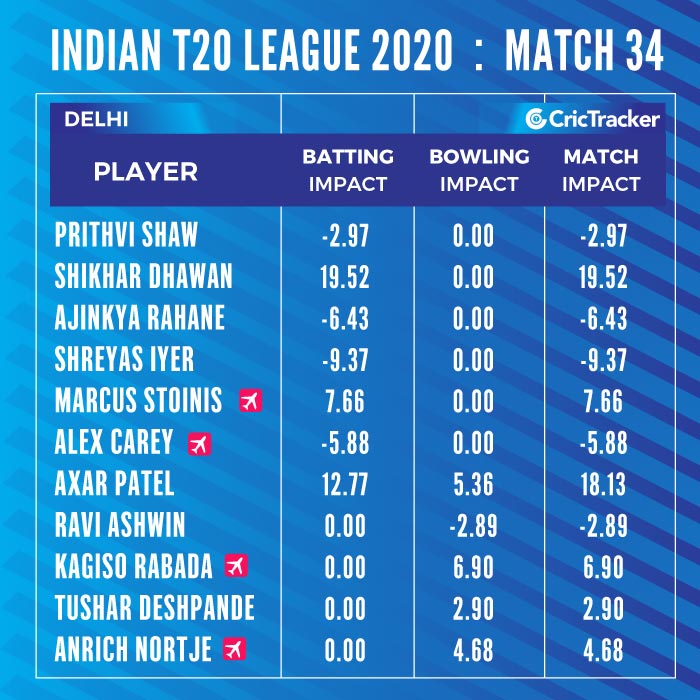 Axar’s bowling performance got an impact rating of 5.36 which was only behind Kagiso Rabada’s 6.9 for the Delhi team as the South African pacer registered analyses of 4-1-33-1. Thus, Axar Patel, with his all-round performance, got a collective impact rating of 18.13 which was only behind Dhawan during DC vs CSK. However, the chase would have never been this complicated if not for Deepak Chahar who went for just 18 runs in his four overs while picking up his nemesis, Prithvi Shaw and Ajinkya Rahane.

Chahar thus got an impact rating of 12.18 for his bowling effort which was the highest during DC vs CSK while his new-ball partner Sam Curran earned 5.4. The left-arm pace bowled a crucial 19th over to put the pressure back on Delhi Capitals. Jadeja might have earned a negative impact of -8.48 for his bowling but his effort with the bat got the best impact among CSK batsmen. Jadeja smashed four sixes during his unbeaten 13-ball 33 and earned an impact of 14.89 which was ahead of Ambati Rayudu’s 11.83 who also struck four sixes during his 45* off 25 balls. 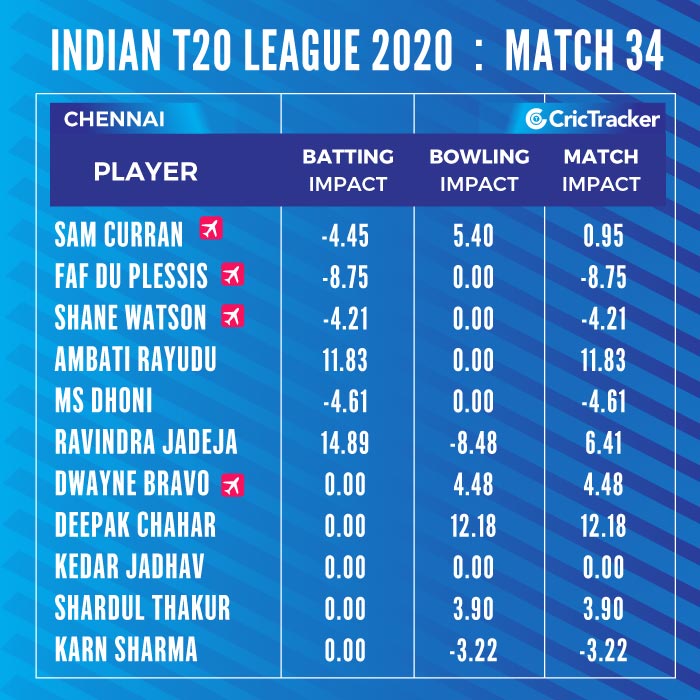