Royal Challengers Bangalore surged to No.2 on the points table following an 8-wicket win over the Kolkata Knight Riders in Abu Dhabi. On a seaming pitch, the KKR team couldn’t get going and were limited to only 84/8; the lowest 20-over total ever made in the IPL. Mohammed Siraj ended up with the analyses of 4-2-8-3 which earned the player of the match award to the pacer during KKR vs RCB. Siraj began his spell with back to back maiden over and sent back three of KKR’s top four batsmen.

Without a surprise, Mohammed Siraj was the most impactful player of the KKR vs RCB game as per the CricTracker’s Match Impact Ratings. The Hyderabad pacer got an impact rating of +15.54 for his efforts with the ball. After Siraj broke the back of KKR’s batting, it was up to the spinners for restricting the opponent to a pretty low total. The Indian Internationals, Yuzvendra Chahal (+7.71) and Washington Sundar (+6.93) collectively conceded 29 runs in eight overs and also claimed three wickets.

Chahal claimed the wicket of Dinesh Karthik for the second time this season and also dismissed the dangerous Pat Cummins. Sundar got the better of Eoin Morgan and also bowled a maiden over. While Mohammed Siraj won player of the match award for his bowling performance, the two Knight Riders on the losing side came close to topping the match impact. Captain Eoin Morgan scored 30 from 34 balls in his 300th appearance in Twenty20 cricket while none of KKR’s top seven even scored more than 10 runs.

The knock helped Morgan earn an impact rating of 12.36 which was the highest for any batter during KKR vs RCB. Lockie Ferguson did ensure the net run rate of Kolkata Knight Riders didn’t get worse. Ferguson, who scored just 23 runs in his T20 career before this game, scored an unbeaten 16-ball 19. It fetched him an impact of 10.85 while his match impact read 15.54 as he added up +4.68 with his bowling. Lockie, fresh of a match-winning performance, conceded only 17 runs in his four overs and picked Aaron Finch’s wicket. 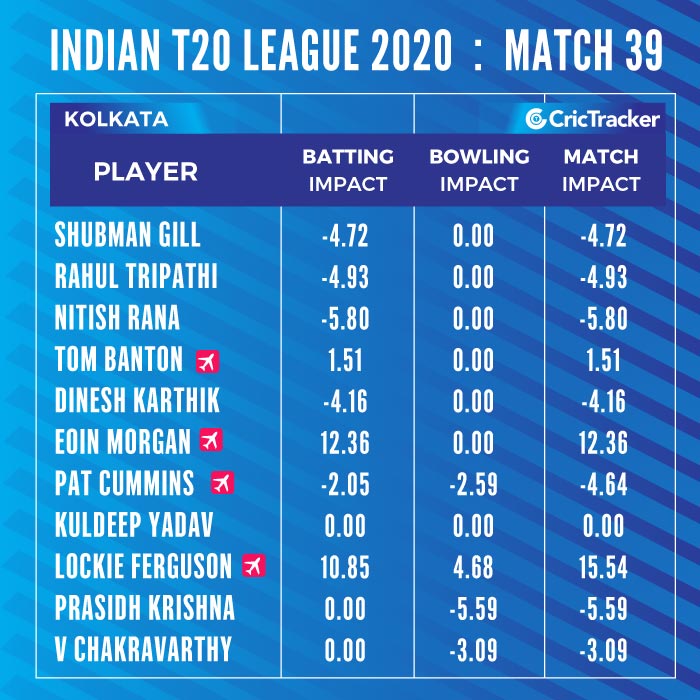