Mumbai Indians put on one of the most dominant performances ever during CSK vs MI.

Mumbai Indians surged back to the top of the points table after they thrashed the Chennai Super Kings by 10 wickets on Friday. The absence of their regular skipper Rohit Sharma was barely felt due to the performance of their bowlers. The MI pacers found some assistance from the pitch which made them take out the CSK’s top-order for just three runs. CSK got to 43/7 by the 9th over and stood on the verge of bagging the lowest IPL total ever. But some later hitting by Sam Curran took Super Kings to 114/9.

Trent Boult was the chief destructor in CSK’s collapse picking up his maiden 4-wicket haul in the IPL which included three wickets in the powerplay only. The left-arm pacer’s bowling efforts in CSK vs MI earned an impact of +17.38 but was only next to Ishan Kishan in terms of match impact. The youngster smashed an unbeaten 37-ball 68 during the 10-wicket win by taking on some of the best new-ball bowlers around. Thus, he ended up with an impact rating of +20.64 as per the CricTracker’s Match Impact Ratings. 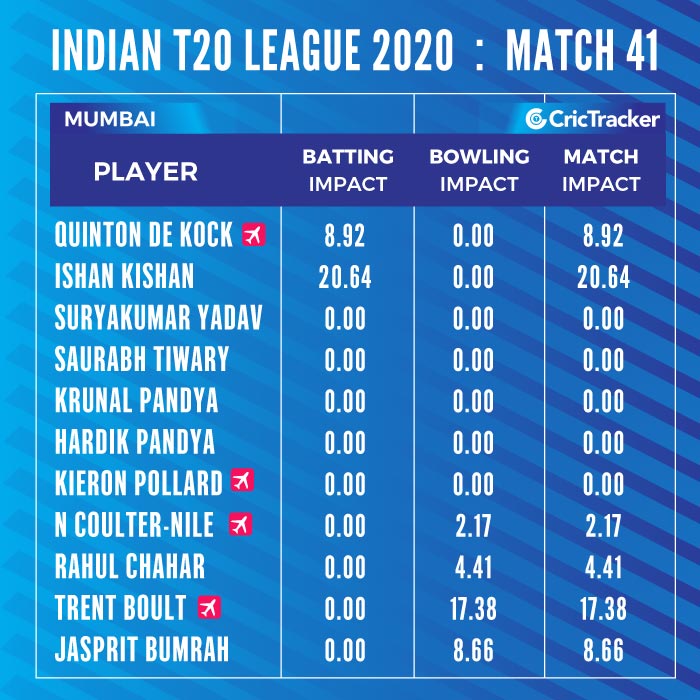 The fight put out by Sam Curran did come close to impact Boult and Ishan had during the CSK vs MI. The all-rounder smashed six boundaries during his 47-ball 52 which not only saved CSK from bagging the lowest total in the history of IPL but also helped them to play full 20 overs. The knock had an impact of +14.67 making him one of the two players with positive impact rating in the match for CSK. Imran Tahir, who registered his highest IPL score of 13*, got an impact rating of +7.74 for his involvement in a record partnership.

The bowlers of Chennai Super Kings failed to show some fight as none of them could create any chance in avoiding a 10-wicket defeat. The three pacers Deepak Chahar (-3.57), Jos Hazlewood (-3.07) and Shardul Thakur (-4.22) returned with negative impact rating in CSK vs MI. The reason was their inability to take wickets on a pitch where Mumbai Indians ran through with the new ball and the three pacers got hit for at least four boundaries apiece. Tahir was most economical bowler giving only 22 runs in his three overs. 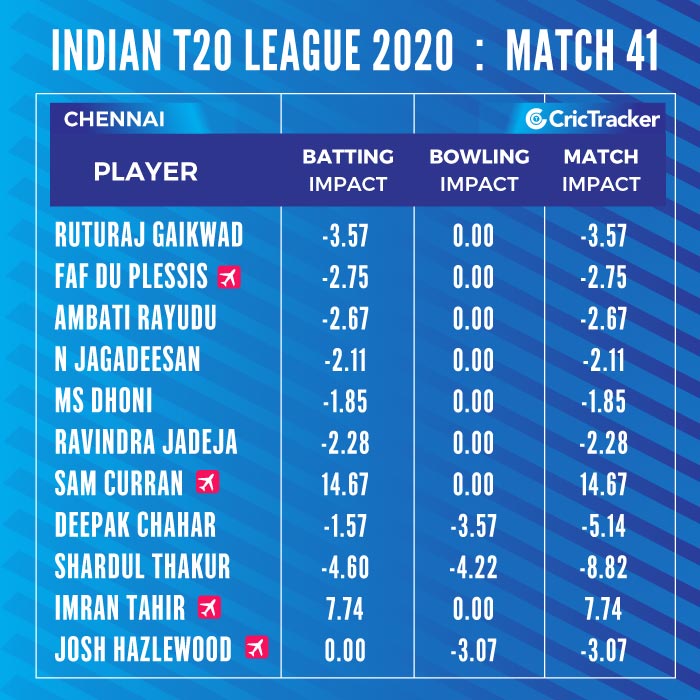