Varun Chakravarthy had the best impact ratings among the bowlers.

The Delhi Capitals’ hopes of finishing in top two got dented by the Kolkata Knight Riders who handed them a 59-run defeat on Saturday. In a crucial game for improving chances of playoff qualification, KKR came on the top that too by boosting their NRR which would come handy in case of them being tied on points with any other team. Some ordinary bowling changes did help the Knight Riders finish on 194/6 less than a week after they made 84 runs batting full 20 overs at the same venue.

The Kolkata Knight Riders’ total of 194/6 was built on a record 115-run partnership between Nitish Rana and Sunil Narine for the 4th wicket. Rana, who had a quiet season with the bat, got a promotion to open the batting. The southpaw did not disappoint the management by scoring 81 off 53 balls before getting out in the last over. His pairing with Narine yielded runs for KKR at 12 runs an over after they were crawling at 42/2 in 7.4 overs. The KKR vs DC game was the first appearance of Narine since his bowling action got reported. 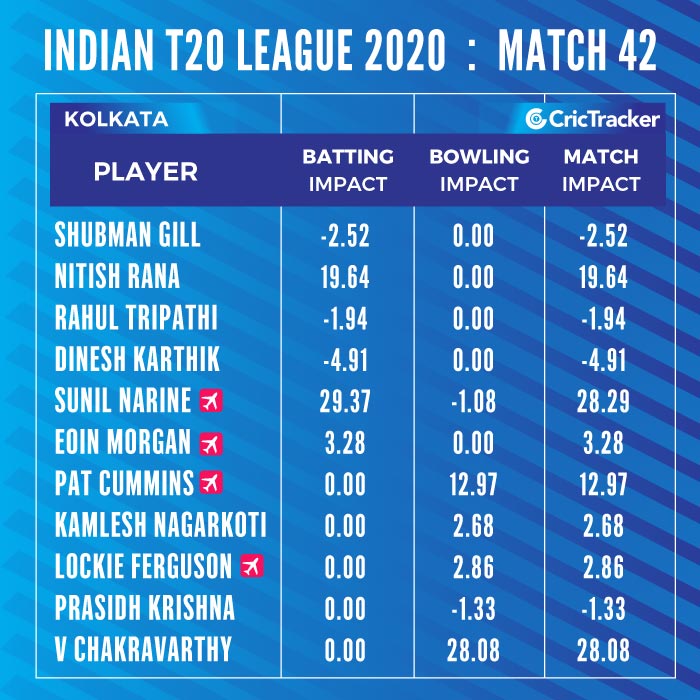 Batting at No.5, the Caribbean all-rounder smashed six fours and four maximums on his way to a 32-ball 64. This performance helped Narine earn an impact rating of 29.37 which is by far the best among batsmen in this match. Nitish’s knock fetched him the second-best batting impact in KKR vs DC of +19.64. Narine conceded 37 runs in his four overs bringing his match impact down to 28.29 as per CricTracker’s Match Impact Ratings but it was still the highest for any player in the game.

Varun Chakravarthy was the star with the ball on Saturday bagging five wickets for only 20 runs. It helped the leg-spinner earn a match impact of 28.08 which was more than twice of the next best bowling performance during KKR vs DC. Pat Cummins has been under pressure for not picking enough wickets but on Saturday, he dismissed both Ajinkya Rahane and Shikhar Dhawan to set up an easy win for KKR. The 3-wicket haul with the ball of Cummins fetched him an impact of +12.97. 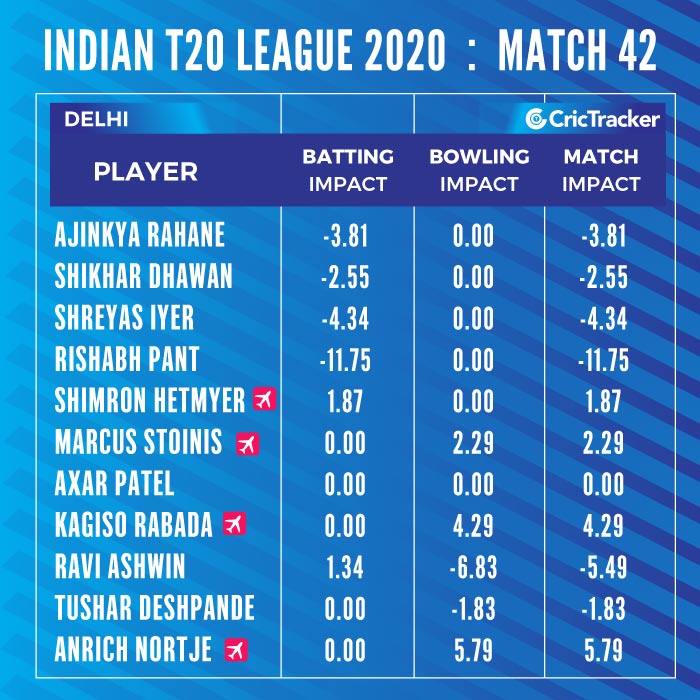