Chris Gayle got his 22nd player of the match award in the IPL.

Kings XI Punjab continue to make a major turn-around in the IPL 2020 as cruised to their fifth successive win by defeating Kolkata Knight Riders by 8 wickets. On a tricky track at the Sharjah Stadium, the Punjab franchise chased down 150 by losing only two wickets and seven balls to spare. This win in KKR vs KXIP has put Kings XI at No.4 position in the points table. Before Chris Gayle played his first game of the season, the KXIP were placed at the bottom with just one win across their first seven matches.

The Universe Boss was at ease on Monday with a quick-fire fifty while the rest did not score quickly enough. Gayle smashed 51 from only 29 balls with as many as five sixes while KL Rahul (28 off 25) and Mandeep Singh (66* off 56) scored at a strike rate well under 120. Gayle came to the crease when Kings XI Punjab was only 47/1 in eight overs but soon the required rate came down to six. Gayle’s batting efforts helped him to earn the highest impact of +18.77 during KKR vs KXIP as per CricTracker’s Match Impact Ratings. 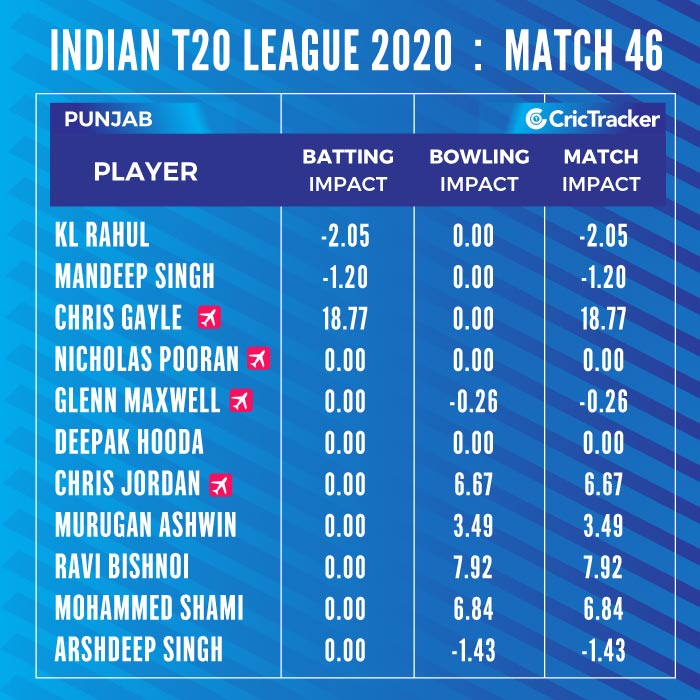 The bowlers of Kings XI Punjab were brilliant in spells starting with Mohammed Shami (+6.84) who claimed two wickets in his first over itself. Ravi Bishnoi broke the dangerous 4th wicket partnership by getting the wicket of Eoin Morgan. He finished with the analyses of 4-1-20-2 which got him the highest bowling impact of +7.92 which is the highest in KKR vs KXIP. Chris Jordan got two wickets including one of the dangerous Sunil Narine to break the back of KKR which fetched him an impact of +6.67.

The Kolkata Knight Riders’ total of 149/9 was built by only three contributions throughout the inning. Shubman Gill (57) and Eoin Morgan (40) added 80 runs in just 7.5 overs after a disastrous start by making most of the short boundaries. The skipper earned an impact rating of +14.95 for his batting effort while Gill’s fifty got him +9.37 impact rating. The highest batting impact for KKR was registered by Lockie Ferguson (+15.10) who scored 24 runs in only 13 balls with help of three fours and a maximum. 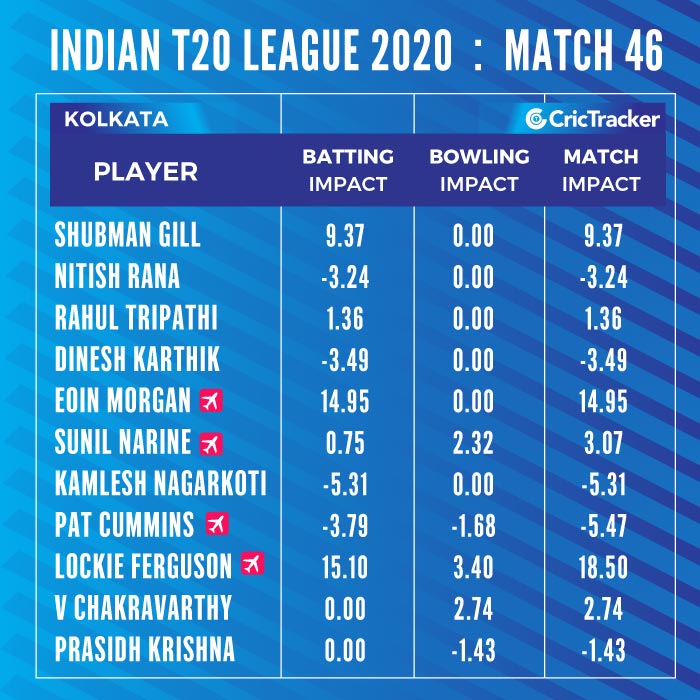