Will KKR risk of opening with Sunil Narine against MI?

The clash off between Mumbai Indians and Kolkata Knight Riders always captures limelight despite the match-up being one-sided in the favor of the MI team. The defending champions Mumbai Indians will now be looking this fixture to earn their first points after starting the tournament with a defeat. The Kolkata Knight Riders will finally be in action on Wednesday at the Sheikh Zayed Stadium in Abu Dhabi.

Narine to open for KKR?

Dinesh Karthik has hinted at opening the batting with Sunil Narine which doesn’t seem to be an ideal option for KKR, especially against the Mumbai Indians. The West Indian all-rounder opening the innings has been one of the key part of KKR’s strategies in the last two seasons. Narine, who began to open since 2017, has got poorest numbers against Mumbai Indians only. 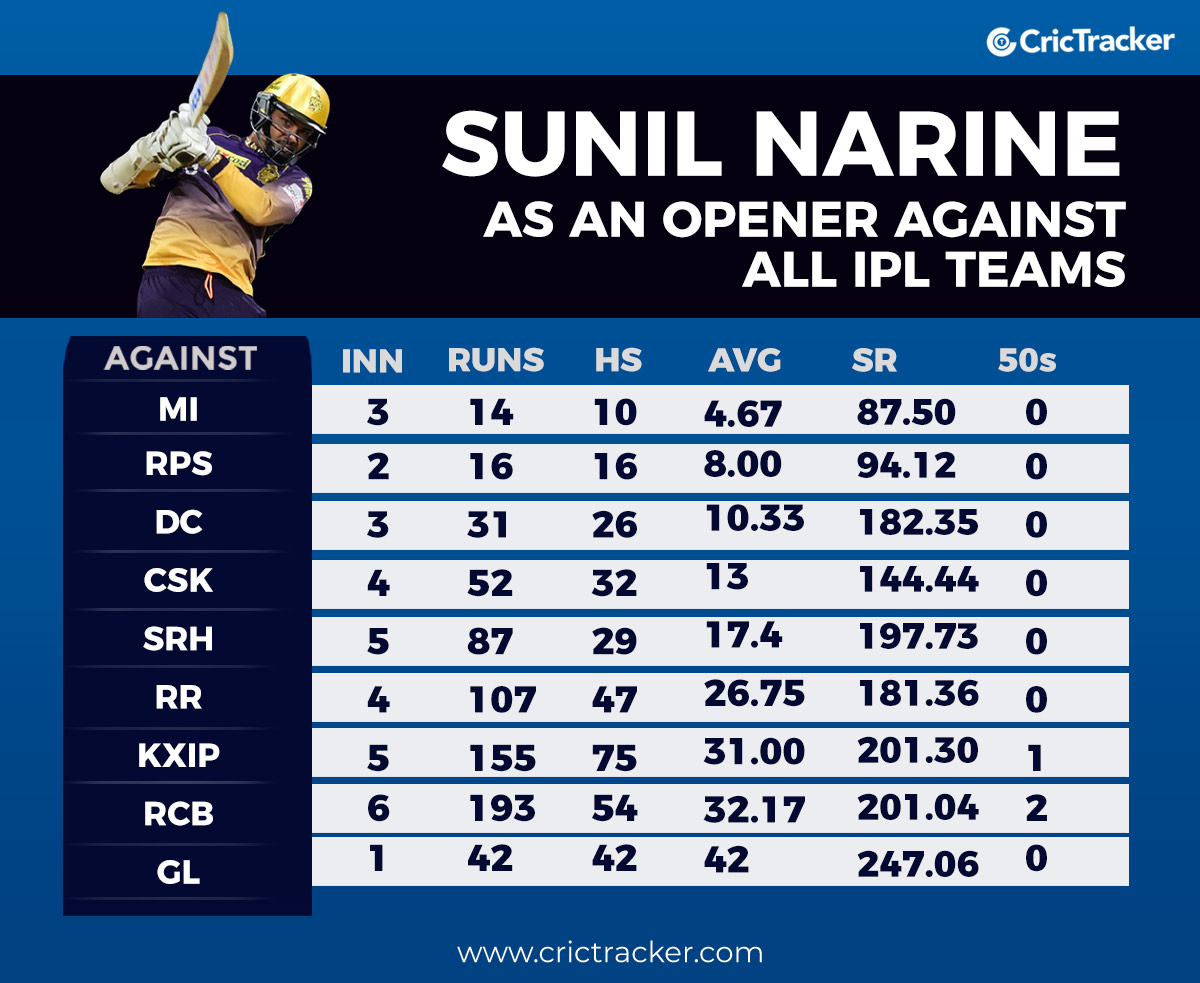 Narine opened in three matches against MI and aggregated 14 runs at a strike rate below 100. All those three innings were across 2017 and 2018 seasons where he had to face some quality pacers in the powerplay. With James Pattinson and Trent Boult likely to bowl with the new ball, the chances of Narine’s success look minimal.

Ever since his debut in 2015, Hardik Pandya has enjoyed batting against the Kolkata Knight Riders who usually prefer to play three spinners. Across seven IPL innings against the Knight Riders, Hardik has amassed 245 runs at an average of 81.66 and at a strike rate of 202.47. His numbers in the middle overs also at the death against KKR look quite terrifying for the opposition. 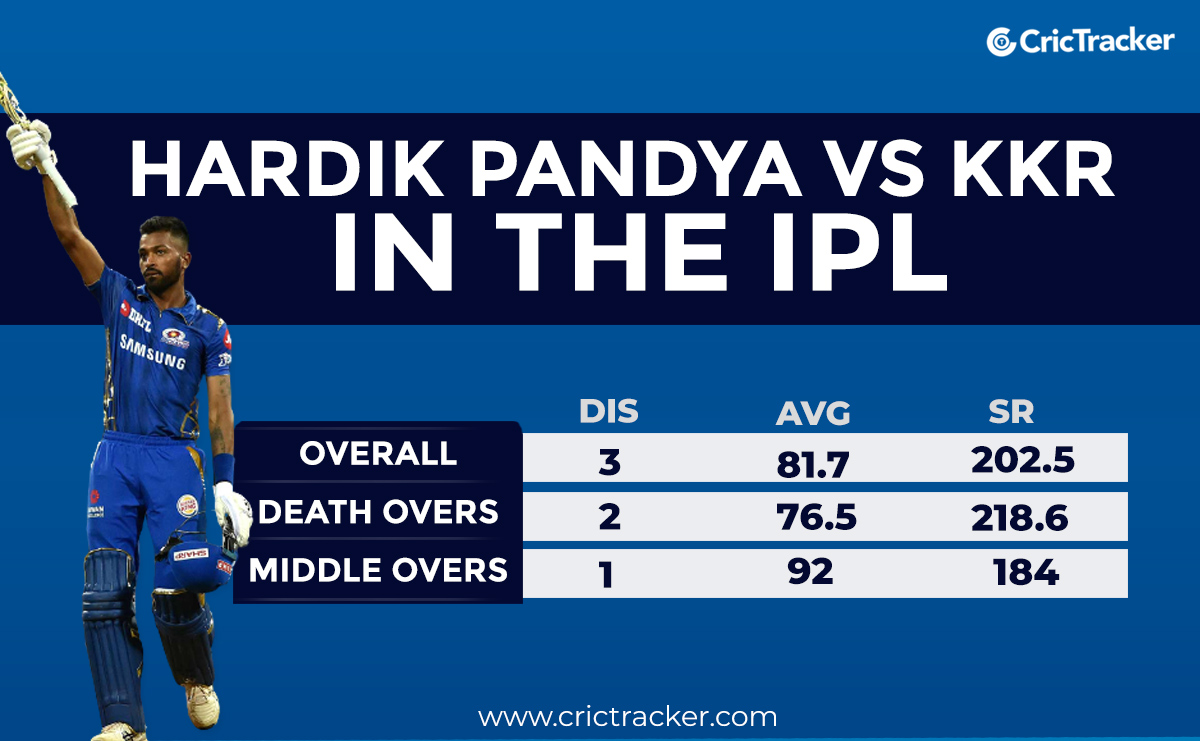 This record could get improved given the way Hardik was striking the ball in his brief stay during the tournament opener against CSK. The only probable way for KKR to stop the younger Pandya will be by fielding two overseas pacers and getting them to bowl. Considering how the Abu Dhabi track played in the first match, KKR might actually prefer two overseas pacers alongside Narine and Russell.

While the spin bowling attack of Mumbai Indians has raised a lot of questions about its effectiveness in UAE, it is Krunal Pandya’s tactics with the ball that matter more for the team. If we look at Krunal’s numbers with phase wise break-up, we get know that he is not the wicket-taker but a support act bowler. Hence, for this tournament, MI should aim at using an extra over of Krunal in the powerplay or death overs. Bowling pacers in the middle-overs could make the batsmen uncomfortable in finding boundaries. 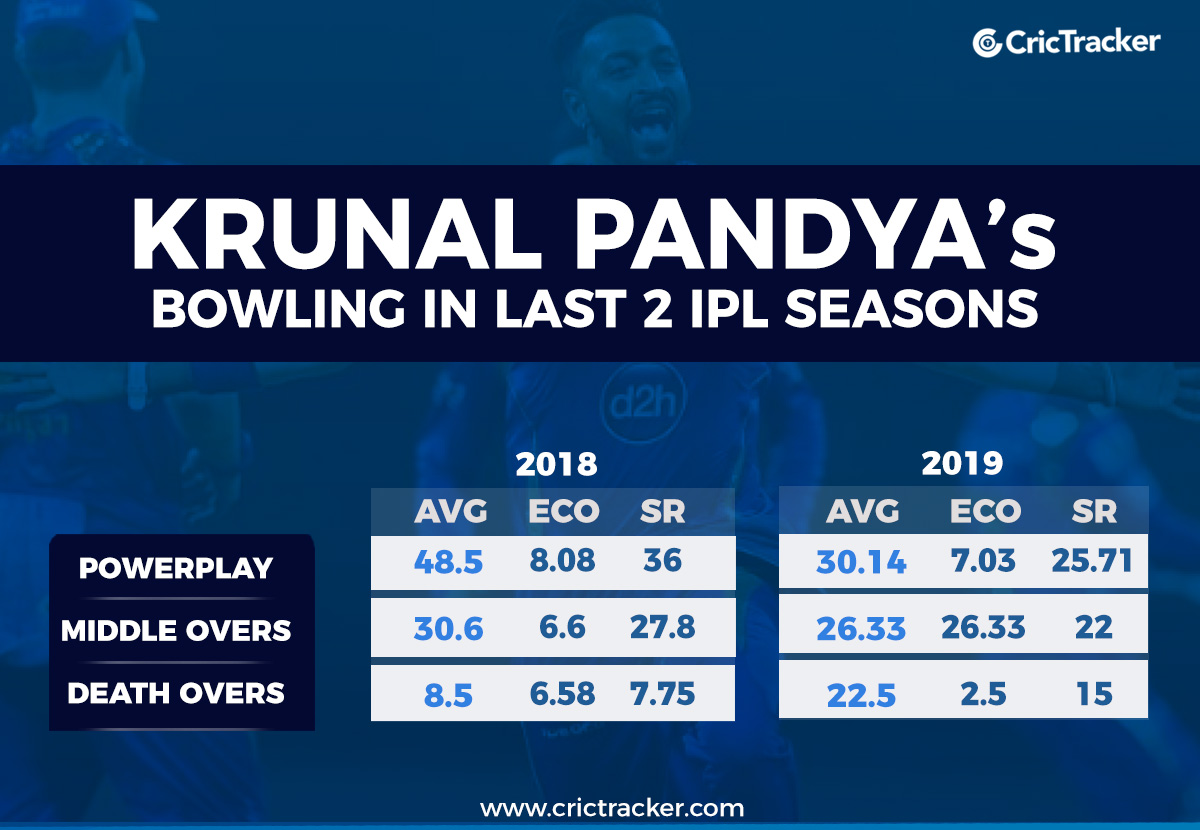