Sandeep Sharma and Jason Holder produced the most impactful performances of RCB vs SRH.

Sunrisers Hyderabad, with a big win against the Royal Challengers Bangalore, not only kept themselves alive in the tournament but also kept the six teams in the battle for three playoff spots. Two points against the Mumbai Indians will help the David Warner-led team to qualify for the playoffs irrespective of the net run-rate. The Sunrisers’ NRR is easily the 2nd best behind that of Mumbai Indians in IPL 2020. SRH improved their already better NRR against RCB by chasing down the target of 121 in only 14.1 overs during RCB vs SRH.

On a ground like Sharjah, the Bangalore line-up containing International batters failed to get a positive batting impact except for Washington Sundar as per CricTracker’s Match Impact Ratings. The all-rounder got an impact of +2.33 with the bat for his 18-ball 21 and later dismissed David Warner to get a bowling impact of +3.95. However, the most impactful performance for RCB during RCB vs SRH came from Yuzvendra Chahal. The leg-spinner had figures of 3.1-0-19-2 while defending a low total which got him a bowling impact rating of +8.93. 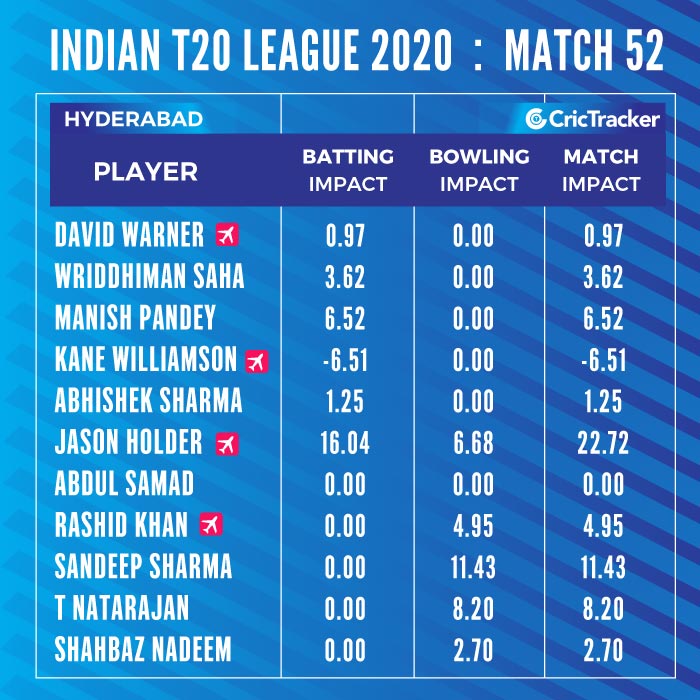 Kane Williamson, playing his 50th IPL game, managed to score only 8 from 14 which fetched him a negative impact of -6.51. However, the innings didn’t cost Sunrisers Hyderabad like against Kings XI Punjab on last Saturday. The major credit for finishing the chase quickly goes to Jason Holder who smashed an unbeaten 26 from only 10 balls with three sixes and a boundary. This got Holder an impact of +16.04 which is at least twice the batting impact of any player during RCB vs SRH game.

Earlier, Holder took two wickets conceding only 27 runs in his four overs which helped him earn a bowling impact of 6.68. The all-rounder’s match impact of +22.72 was almost twice that of Sandeep Sharma’s match impact; the player of the match during RCB vs SRH. Sandeep claimed the wickets of Devdutt Padikkal and Virat Kohli in the powerplay itself and finished with analyses of 4-0-20-2. This effort from Sandeep got him an impact of +11.43 which is the highest bowling impact during the game. 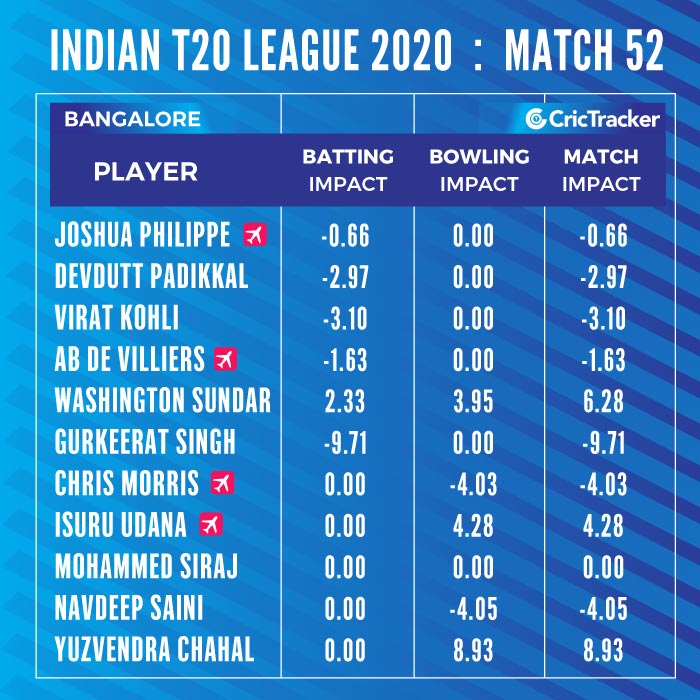