Eoin Morgan and Pat Cummins stepped at the right time for the Kolkata franchise.

The NRR factor produced some dramatic things during the KKR vs RR which ended with Kolkata Knight Riders bagging a 60-run victory. A middle overs collapse saw Kolkata wasting their good start before Morgan gave them a solid finish with an unbeaten 35-ball 68. Later, Royals started the chase hitting 19 runs from first five balls before they lost five wickets in the space of 25 balls. A big win was not possible for the Knight Riders if not for some tight bowling by their uncapped Indian bowlers after the powerplay.

Eoin Morgan might not be the player of the match but earned the highest impact during KKR vs RR as per CricTracker’s Match Impact Ratings. The CWC winning captain earned an impact of +29.83 which will be among the top ten most impactful batting performances of IPL 2020. Pat Cummins, on the other hand, earned 15.30 for his 4-wicket haul which came despite conceding 34 runs. Cummins made a valuable contribution down the order with the bat in the first innings where he scored 15 off 11 balls. Cummins’ batting performance extended his match impact to 21.51 during KKR vs RR where he also claimed the catch of Jos Buttler which sealed the game for Kolkata. However, Rahul Tewatia fight with the bat did delay KKR’s victory and the margin they would have wanted. Tewatia scored 31 off 27 balls with three boundaries which got him an impact of only +2.73. However, his 3-wicket haul in KKR’s innings came at the cost of just 25 runs by dismissing Shubman Gill, Dinesh Karthi and Sunil Narine.

The performance with the ball got Tewatia an impact of +10.58 who finished with a match impact of +13.30 which is the highest for the Rajasthan Royals during KKR vs RR. Shubman Gill has improved his playing style in the recent matches as he struck a 24-ball 36 on Sunday which helped him earn an impact of +7.86. Sunil Narine has been rather disappointing since returning with a change in bowling action. Narine got a negative impact of -3.85 with the ball while his batting impact of -2.58 was also negative. 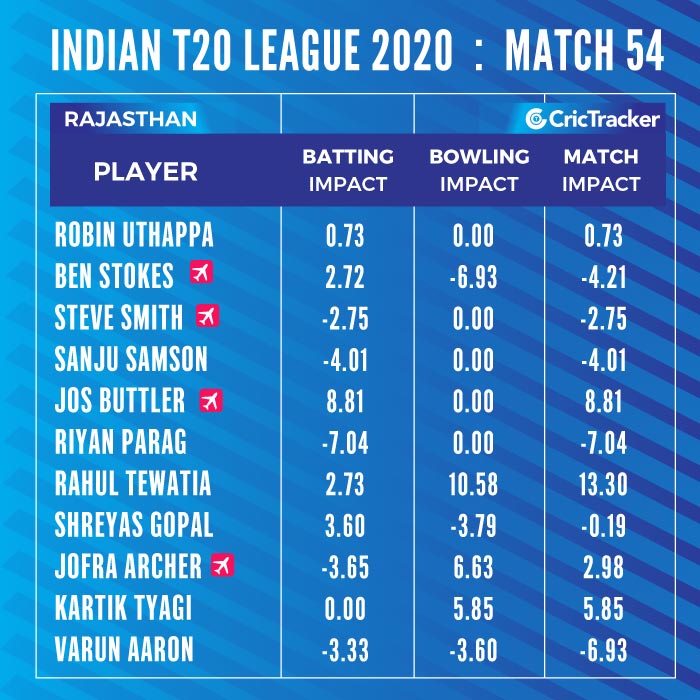