Jofra Archer had the highest match impact during IPL 2020.

The 2020 Indian Premier League (IPL) witnessed many impactful performers through the tournament who helped their team earn some success while few tried to do so. CricTracker brought a special algorithm to evaluate the impact of players through the long tournament in every match. In this article, as per the CricTracker’s Match Impact Ratings, we get to know who were the top players in producing impactful performances in IPL 2020 and also the players who fell behind.

Jofra Archer stood as the IPL 2020’s MVP despite his team Rajasthan Royals finishing at the bottom of the table. Unsurprisingly, the England all-rounder was the most impactful player in our model as he earned an overall match impact of +140.42. Archer was excellent in his new-ball spells and as a result, he earned a bowling impact of +94.86 and also earned a batting impact of +45.57 thanks to his quick-fire knocks down the order in the initial half of the tournament. 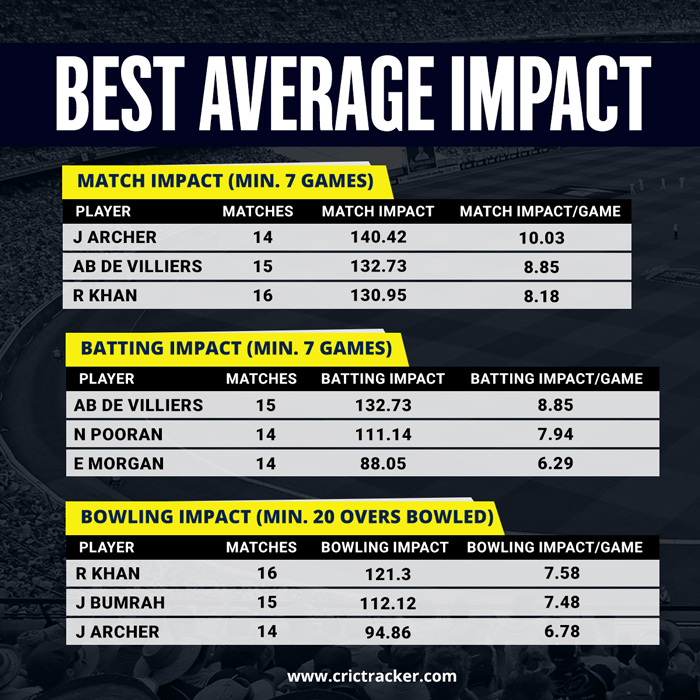 Archer earned a match impact of +10.03 every game which is easily the best for any player during IPL 2020. AB de Villiers is next on the list with +8.85 as the wicketkeeper-batsman stood as the main face of Royal Challengers Bangalore’s batting through the tournament. While the RCB batsmen were restricted to strike rate of 120-130, the Superman from South Africa was striking comfortably at 150+. It was the reason why De Villiers was the player of the match for RCB in three of the seven matches they won. 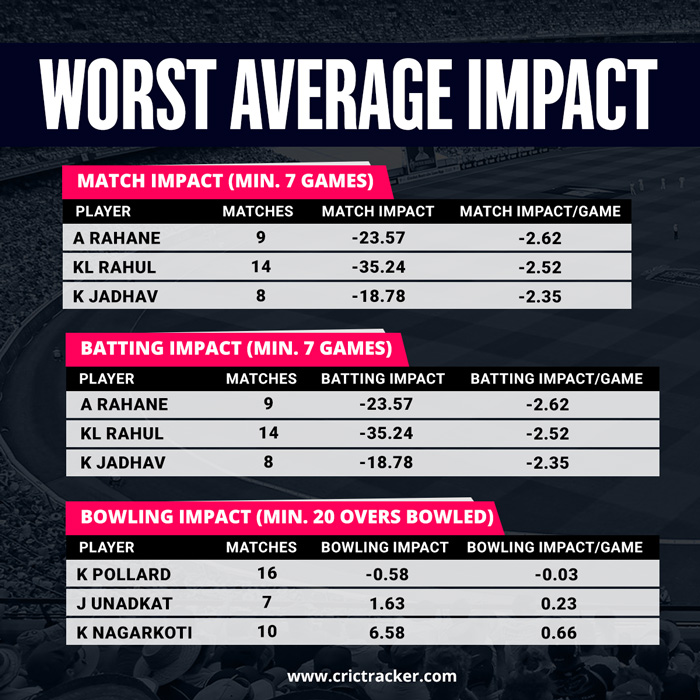 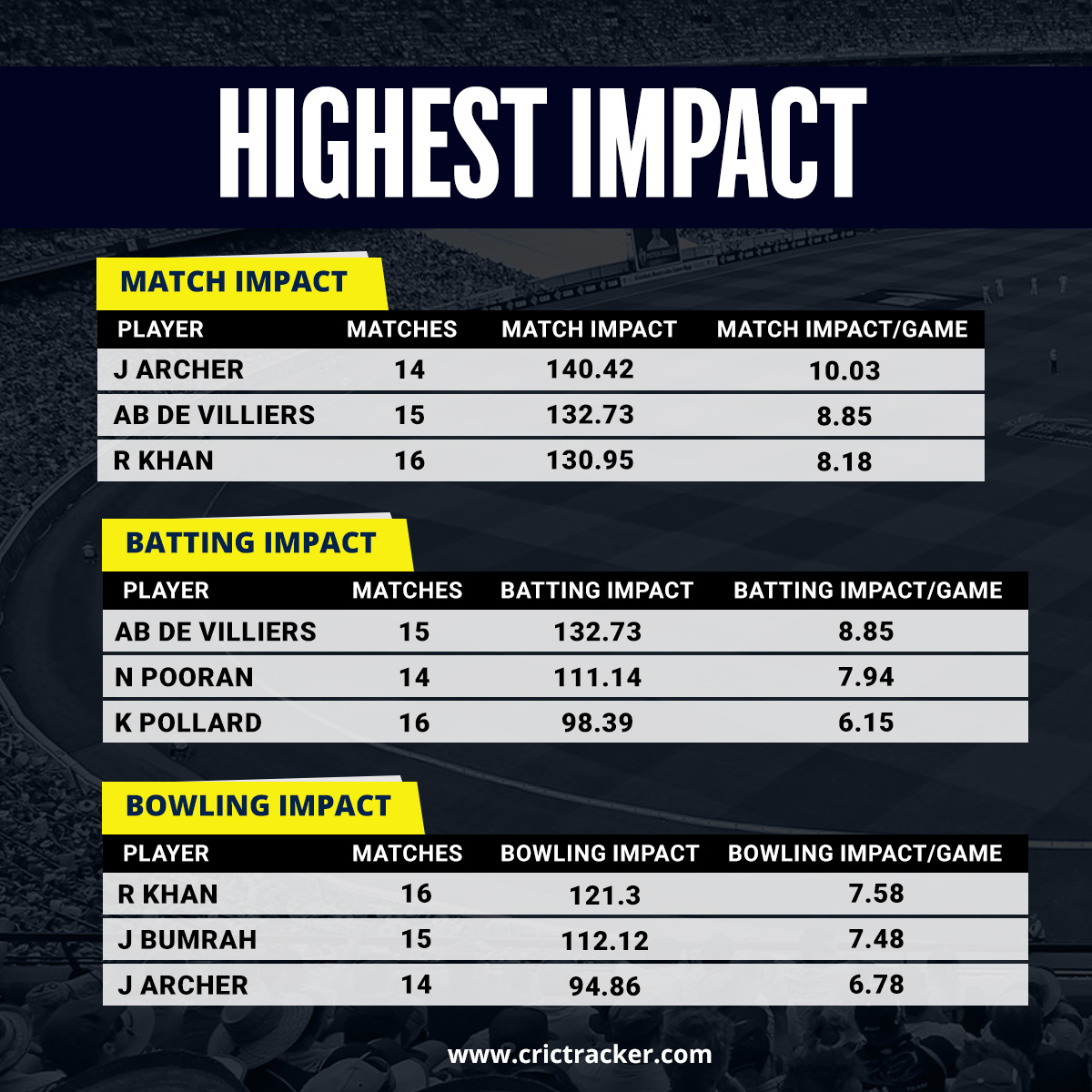 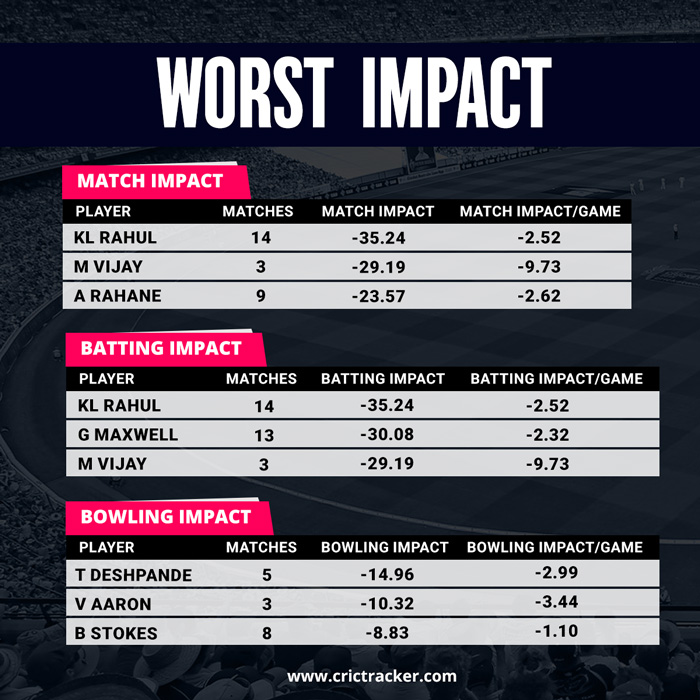 The purple cap holder Kagiso Rabada earned a bowling impact of +73.18 which was the 7th highest in IPL 2020. On most occasions, Rabada got wickets once the result of the match was a mere formality. The Orange Cap holder KL Rahul, surprisingly turned out to produce the least impact of all the players in the tournament. Rahul, who scored 670 runs, earned an impact of -35.24 through the tournament as he occupied the crease for long period in most of the matches without enough number of runs under his belt. 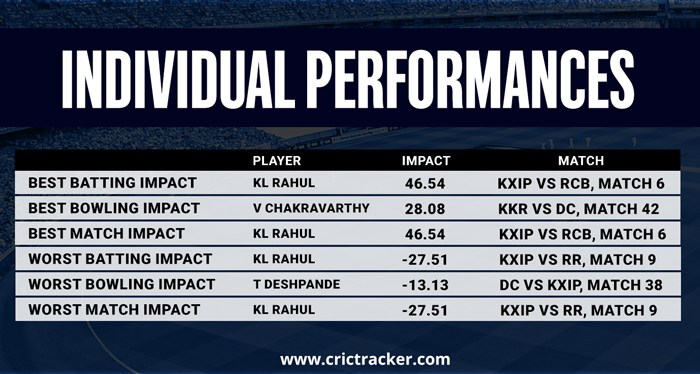 The 2020 IPL was an uncertain tournament with respect to impact for KL Rahul as his unbeaten 132 against RCB earned the highest match impact and batting impact in any of the 60 matches. He finished the game with an impact of +46.54 but got -27.51 in the very next match against Rajasthan Royals which is the lowest as he scored under 130 strike rate in a game where 450 runs were aggregated. Varun Chakravarthy and Tushar Deshpande earned the highest and lowest impact ratings with the ball during a match in IPL 2020.