Royals' league phase will end with a game against Kolkata Knight Riders on 1st November in Dubai.

The IPL franchise Rajasthan Royals will be on a mission to recreate the magic of 2008 edition, in which they had registered a victory on the T20 Cup, in the 2020 session in the United Arab Emirates (UAE). The tournament will commence from September 19, with the final to take place on November 10. The franchise has services of players like Steve Smith, Jos Buttler, Jofra Archer, and Ben Stokes.

Also, the new joinees including David Miller, Andrew Type, Tom Curran, Robin Uthappa, Yashasvi Jaiswal and many others will try to make an impact to improve team’s performance from the last session, where they had finished second-last on the points table. Though the team looks solid under the leadership of Steven Smith, it will miss out the service of their star Indian batsmen Ajinkya Rahane who was traded to Delhi Capitals ahead of the 2020 edition.

It is noteworthy that Rajasthan has not made it to the IPL final even once since winning the trophy in 2008. The closest they came to the title was in 2013 when they finished third after losing to the Mumbai Indians in the 2nd Qualifier.

Rajasthan Royals will begin their IPL 2020 campaign against CSK

The Royals will begin their campaign in IPL 2020 with a match against Chennai Super Kings on September 22 followed by a game against Kings XI Punjab on September 27 in Sharjah. The team will travel to Dubai for playing with Kolkata Knight Riders on September 30 before reaching Abu Dhabi to lock horns with Royal Challengers Bangalore and Mumbai Indians on October 3 and October 6 respectively.

In their sixth match of the 13th edition of the cash-rich league, they will be up against Delhi Capitals in Sharjah. The team then heads back to Jaipur to play three consecutive fixtures against Sunrisers Hyderabad, DC and RCB on 11th, 14th and 17th October respectively out of which the matches against SRH and RCB will be played in the afternoon.

This will be followed by a match against CSK in Abu Dhabi and on October 19 and SRH on October 22 in Dubai. Rajasthan will then take upon MI and KXIP again on October 25 and October 30 respectively in Dubai. RR’s league phase will end with a game against Kolkata Knight Riders on 1st November in Dubai. 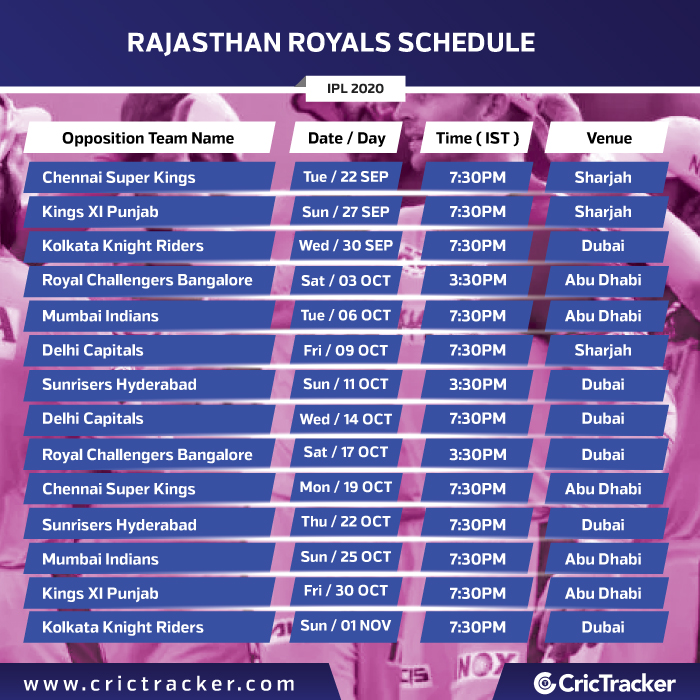