IPL 2020: Why an unburdened MS Dhoni will be a dangerous MS Dhoni

There will be no talk on whether Dhoni’s performances in the IPL would decide his future in the Indian side, there would be no talk about whether Dhoni can prove himself once again and make a return to the side. 10th July 2019 – It was the biggest stage in the game of cricket. In the semi-finals of the 2019 World Cup, the Indian side was battling New Zealand. 25 runs were needed from 10 balls for India to triumph. And, a certain Mahendra Singh Dhoni was on strike. And, that meant that the hopes of millions of Indians were alive too.

Dhoni had pulled off miraculous chases on innumerable occasions in the past, and the entire nation was hoping that he would pull off another heist on the grandest stage. Lockie Ferguson had the ball in his hand and the Indian side was 25 runs away from victory. Off the first ball of the 49th over, Dhoni had smashed Ferguson for a six over deep point, and India was getting closer to the target.

Ferguson ran in, Dhoni nudged the ball awkwardly towards square leg and set off for a couple. Martin Guptill threw the ball in as Dhoni was scampering for the second run, and the Indian legend was caught just inches short of his crease. Probably if Dhoni was a decade younger, he would have made it. But on that day, he couldn’t.

And as Dhoni departed, the hopes of the nation went into thin air, as India crashed out of the tournament, losing to the Kiwis by 18 runs.

Ravi Shastri’s statements on MS Dhoni and the IPL

In fact, after that heartbreaking run out, Dhoni was not seen in Indian colors and went on an exile from international cricket. But, Indian coach Ravi Shastri was of the opinion that the door was still open for Dhoni if he performed well in the 13th edition of the IPL that was scheduled to start from the last week of March 2020.

In fact, these were the exact words from Shastri regarding Dhoni’s chances and the IPL. 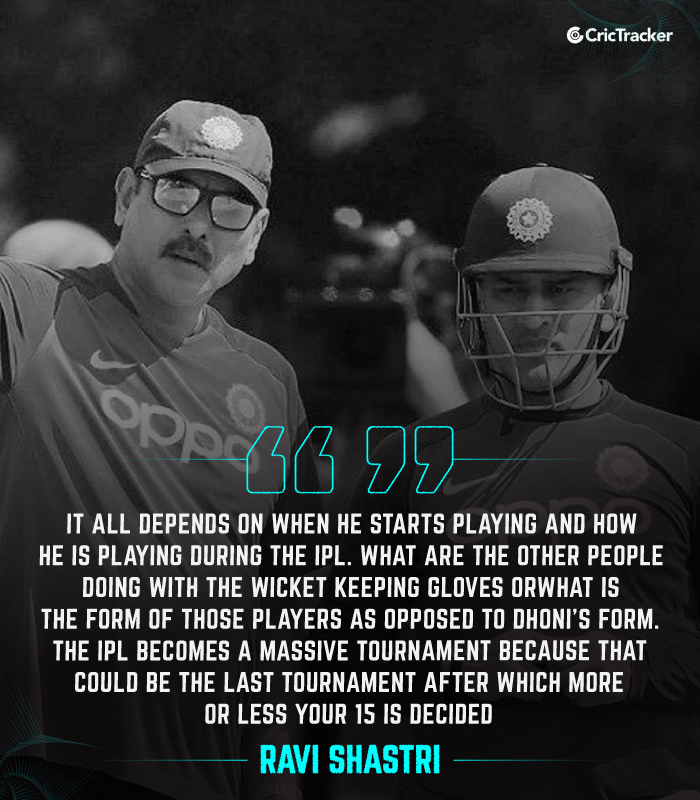 So, in a perfect sporting world, the 13th edition of the IPL would have started in March 2020, and Dhoni would have had a final chance to make a comeback into the Indian side. The selectors would have scrutinized Dhoni’s performance in the IPL and would have analyzed whether he still ‘had it’ in him to make a return to the national side.

Also, in a perfect sporting world, the T20 World Cup would have been scheduled for October 2020 in Australia. But then, the coronavirus pandemic wreaked havoc across the sporting world and the cricket calendar went for a toss. The IPL was postponed to September 2020, and in a massive setback for Dhoni, the ICC decided to postpone the T20 World Cup.

That was possibly the final nail in the coffin for Dhoni. He would have to wait for another year to play the next major ICC tournament for his country, and he would also be well over forty years of age. And, on the 15th of August 2020, Dhoni stumped the world and his legion of fans by deciding to draw the curtains down on his international career.

A burden less MS Dhoni in the IPL now

But, Dhoni will turn out in the yellow for the Chennai Super Kings in September in the UAE. And for once, there will be no talk on whether Dhoni’s performances in the IPL would decide his future in the Indian side, there would be no talk about whether Dhoni can prove himself once again and make a return to the side.

And with the burden completely lifted off his shoulders, this could prove to be a blessing in disguise for the CSK franchise. Dhoni will not have to prove anything to anybody and will be completely set free. And, this could well mean that he can set himself on the bowlers with abandon, much like his younger days. He can go after the bowling with absolutely nothing binding him, and he can wreak havoc with the willow.

And, a burden less MS Dhoni could be a dangerous MS Dhoni.

Yes, Dhoni will not wear the blue jersey ever again, but the 13th edition of the IPL might see the legend set the stage on fire when he walks out in the yellow for the Chennai franchise.