Shikhar Dhawan will be the captain of this Fantasy team.

While the cricket fans were enjoying the thrilling IPL season 2021, it got postponed amidst the Covid scare. Season Fantasy Players are likely to resume their play whenever the IPL 2021 resumes again. While the number of remaining transfers will be same, fantasy players will be allowed to construct a fresh fantasy team for the first match after resumption.

While the future of IPL 2021 season is uncertain, let’s review the season best performances so far from the fantasy perspective. Here we are providing the best season fantasy XI based on their returns. This fantasy team is constructed based on the official fantasy league rules like Overseas limit, Skill limit, Total Credits limit etc.

DC and CSK players dominated the team with three players from each of these teams. No player from MI and SRH teams could find a spot in the season best fantasy XI. The credits value shown in brackets for each player is the credit value as per official fantasy league.

The last season Orange Cap holder KL Rahul is amongst the highest run scorers this season as well. Scoring 331 runs in seven matches with an average of 66.20, he stood as second highest scorer this season. He was instrumental in Punjab’s wins this season. KL Rahul made 50+ runs in all three PBKS wins this season.

The newly appointed Captain for RR, Sanju Samson scored 277 runs in seven matches this season at an average of 46.16. He started the season with a bang, scoring century in the first match. Since then he received good amount of criticism for scoring less than twenty runs in the next three matches.  He played responsible innings in the last three matches with scores of 40+ runs.

Shikhar Dhawan is the current orange cap holder this season, topping the charts with 380 runs in eight matches. He is our fantasy team captain, scoring massive 587 fantasy points this season. His change of gears at the right time was crucial to Delhi wins this season.

After a disappointing last season, Prithvi Shaw bounced back this time, scoring 308 runs in eight matches. His strike rate of 166 is something critical in Delhi’s success this season. His feat of six fours in first over against KKR is the highlight of the season.

Faf’s consistency is one of the important factor in CSK’s turn around this season. Faf scored 320 runs in seven matches with a strike rate of 145. He started with a duck in the first match. However, he scored 50+runs in every match in the last five matches including a 95 not out against KKR.

Batting at number three, Moeen Ali is the Fantasy gold this season. Most of the fantasy managers chose him as the first choice captain for the CSK matches. He scored 206 runs in six matches at a strike rate of 157. However, he managed to bowl only 12 overs in six matches and took five wickets this season.

Ravindra Jadeja’s improved all round performance is an important factor in Chennai wins this season. He frequently got a promotion in the batting order. His batting against RCB, scoring 37 runs in the last over is the highlight of this season. He scored 131 runs in six innings at a strike rate of 161 and took six wickets with an economy of 6.7. Among the bowlers who bowled more than twenty overs, his economy is the second best so far.

The most expensive signing this season, Chris Morris did reasonably well to justify his price tag. He took 14 wickets in seven matches and scored a crucial 18 ball 36 run winning knock against DC.

Pat Cummins took nine wickets in seven matches this season. However, his batting got the attention for the first time in IPL. His knock of 66 off 34 runs, batting at number eight showcased the depth of the RR batting line-up.

At the beginning, no one imagined that this uncapped bowler will be leading the DC bowling attack this season. With 14 wickets in eight matches at an economy of 7.7, he became the second highest wicket taker this season.

Harshal Patel is the current purple cap holder and he is our fantasy team’s Vice Captain. He is critical in RCB’ s dominance this season, bagging 17 wickets in seven matches including a five wicket haul against MI in the first match. His bowling strike rate of 9.88 is the second best this season, next to Andre Russell. 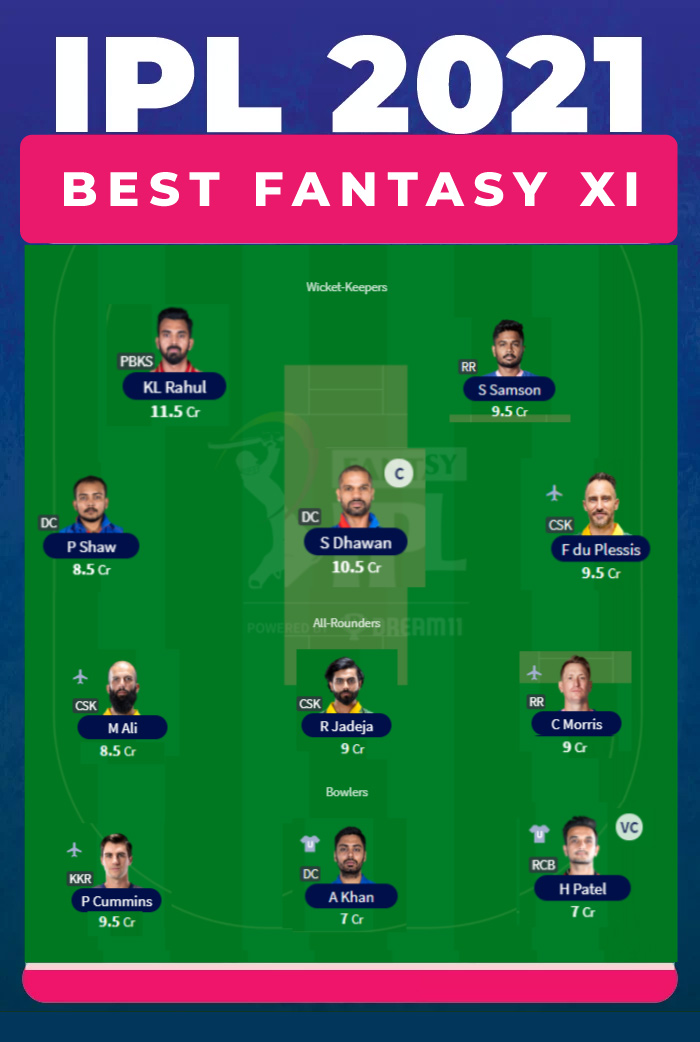