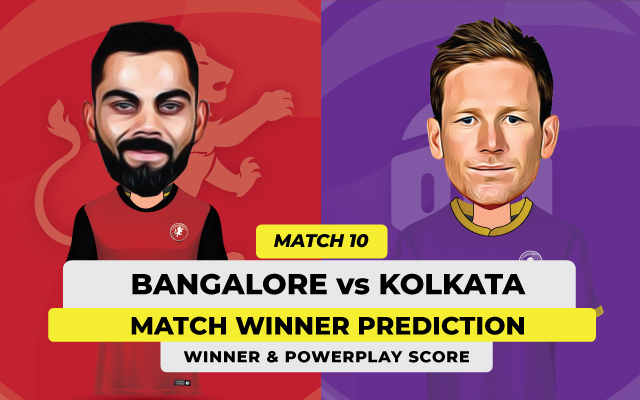 Kolkata Knight Riders’ (KKR) confidence would have hit rock-bottom after their collapse at the hands of Mumbai Indians (MI) in their second match of IPL 2021. Even as their bowlers did an excellent job, their batting crumbled, especially the middle order.

Their third match is against the high-flying Royal Challengers (RCB) in the first of Sunday’s doubleheader at the MA Chidambaram Stadium in Chennai. In their last three meetings, the Challengers have come out trumps three times. In fact, this time around, Virat Kohli and Co is the only team, who’s yet to taste defeat.

With a net run rate of +0.175, RCB are sitting on top of the points table. In their previous game, they beat Sunrisers Hyderabad (SRH) by six runs and it remains to be seen if the Knights can get the better of them.

Virat Kohli has scored 66 runs in two games at a strike rate of 113.79. Hence, it can be said that he’s yet to perform at his best. However, against the Knights, the 32-year-old has decent numbers. In 23 innings, the right-hander has notched 725 runs at an average and strike rate of 40.28 and 130.16 respectively. He also has four fifties and a top score of 100 at the Eden Gardens.

Mohammed Siraj has been the most economical bowler for the Challengers in IPL 2021 with an economy of less than six, though he has only picked up two wickets. Moreover, last year, he had the best figures of 3/8 against KKR. He’s likely to take the new ball and Kohli’s men would be hoping for the right-armer to make early inroads into the opposition batting.

Bangalore win the toss and bat

Kolkata win the toss and bat

Bangalore to win the match