In their previous meeting, RCB beat the Knights by 38 runs.

Royal Challengers Bangalore (RCB) started the 2021 Indian Premier League (IPL) with four wins on the trot. However, the Virat Kohli-led unit has stuttered a wee bit after losing two out of their last three games. Even in the game against the Delhi Capitals (DC), they got over the line by a solitary run.

In their next match, they would be up against the Eoin Morgan-led Kolkata Knight Riders (KKR). After beating them at the Chepauk, the Challengers would be looking to put forth a similar show even at the Narendra Modi Stadium in Ahmedabad.

The Knights, on the other hand, lost their previous game at the hands of the Capitals and are placed sixth in the table. They need a win desperately to make their way up the points, but the task won’t be easy against the in-form RCB.

The pitch in Ahmedabad has been fairly decent for batting. But the track has also helped the slower bowlers, especially the spinners, to a large extent. Batting second remain as the preferred option since there are runs on offer from the strip.

The conditions will be sunny with the temperature around 36 degrees Celsius. The humidity will be on the lower side with no chances of a downpour.

AB de Villiers couldn’t get going in RCB’s previous match, but the threat he poses to the opposition can’t be undermined. In seven games, he has scored 207 runs at an average and strike rate of 51.75 and 164.28 respectively.

Against the Knights, the 37-year-old has notched 511 runs at an average and strike rate of 39.31 and 156.27 respectively. The focus will again be on the right-hander.

Harshal Patel has been exceptional for the Challengers at the death. Though he went for quite a few runs in the previous game, overall, numbers are worth envying. In seven games, the fast bowler has 17 wickets to his name at an economy of 9.17.

In RCB’s last meeting against the Knights, the pacer bowled beautifully in the death overs as he picked up two wickets, conceding a mere 17 runs. 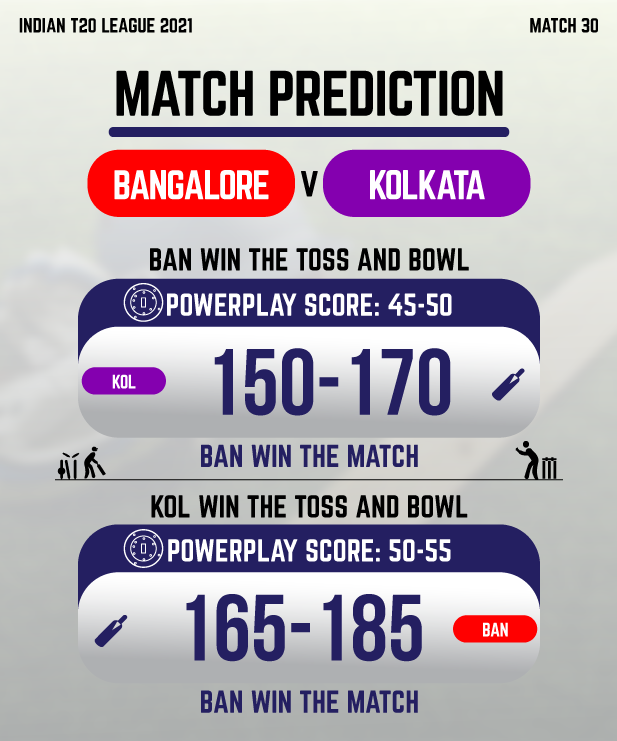