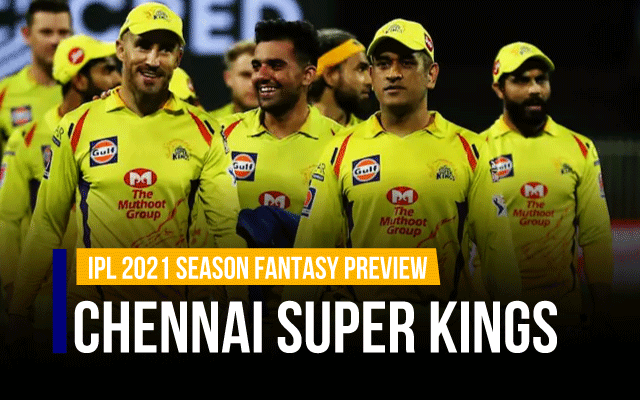 Traditionally CSK team was performing well on the sluggish surfaces in Chennai. But this season, they are going to play in good batting conditions. Lack of firepower in batting and pace bowling units will be a worry for CSK. It will be interesting to watch how Dhoni’s team overcome their weakness and adapt to conditions in IPL 2021.

In this article, Let us analyze CSK Team from Season Fantasy League Perspective. The number given next to the player in brackets is the number of credits value in the official season fantasy league.

Sam Curran(9): Sam Curran is the favorite captaincy option as he contributes with both bat and bowl. Last year, due to Chennai’s poor batting display, Sam Curran got the opportunity in the top order. But this year with Raina returning, Ruturaj Gaikwad performing, Sam Curran might be stuck to finishing role in the lower middle-order role.

Faf Du Plessis(9.5): Faf is the favorite captaincy option for CSK matches due to his batting position and consistent scoring ability.

Ravindra Jadeja(9)/Dwayne Bravo(8.5): These both players add good fantasy value due to their dual skills. However, they will mostly be playing the finishing role. So, their batting is unlikely to yield great fantasy returns.

Ambati Rayudu(9)/Suresh Raina(9.5): Their batting position makes them an attractive fantasy option. However, their form is in question. It might be worth waiting to see how they perform before taking into the fantasy team.

Ruturaj Gaikwad(8): Last year, he got limited opportunity only at the end of the season and he proved himself quite well. If he could repeat his consistency again this season, then he will be the preferred uncapped choice.

Shardul Thakur(8.5): Despite leaking the runs, he will still be among the highest wicket-takers for CSK due to his death bowling.

Moeen Ali(8.5): If Moeen Ali gets to open the innings or bats up in the order, he will add good fantasy value with his dual skills.

MS Dhoni(10):  Dhoni has the potential to earn good fantasy points due to his dual skills. However, his batting position and fantasy price tag at 10 credits make him slightly unattractive from a fantasy perspective.

Uncapped: Ruturaj Gaikwad(8) and K Gowtham(7.5) will be favorite among the uncapped players who can make it to the final XI.