In this article, let us analyze the Delhi Capitals team from IPL 2021 Season Fantasy League perspective. 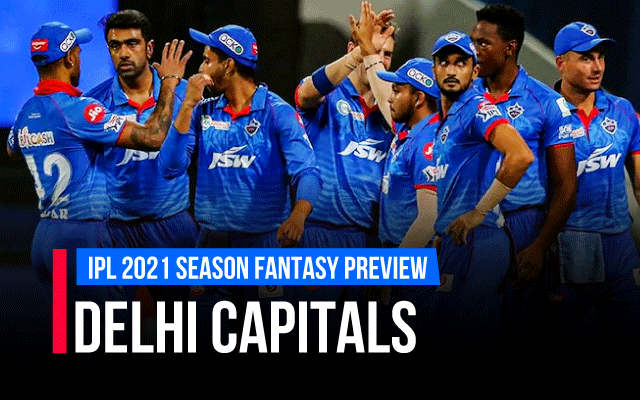 The last season’s finalist Delhi Capitals are all set to start the new season under the new captain Rishabh Pant. This season Delhi Capitals are going to play on more batting-friendly surfaces. Delhi, unfortunately, misses a few of their first-choice players(Kagiso Rabada, Anrich Nortje, Axar Patel) for the initial games of IPL 2021. However, they have a strong core and backups for each player. So, they can easily overcome the challenge.

In this article, Let us analyze Delhi Capitals Team from the season Fantasy League Perspective. The number given next to the player in brackets is the number of credits value in the official season fantasy league.

Rishabh Pant(10): The in-form Rishabh Pant is the strongest captaincy option due to his dual skills. This year due to his captaincy responsibilities, he may choose to go slightly down the order to finish the matches. Watch out for his batting position especially while Delhi is chasing.

Kagiso Rabada(10.5): The last year’s purple cap holder is one of the best pace bowling options in the league and his wicket-taking skills make him a great fantasy captaincy option.

Prithvi Shaw(8.5): Prithvi Shaw had a poor season last year. But this year he did well in domestic cricket and is likely to do well in the IPL as well. If he starts batting well, he is a good grab at 8.5 Credits

Marcus Stoinis(9): Last season, he opened the batting due to the poor form of Prithvi Shaw/Rahane. When he is not opening the batting, he will mostly be playing in the finisher role. He is not the regular bowler for Delhi Capitals. He will be a great captaincy option if he opens the batting, otherwise not.

Ajinkya Rahane(8.5)/Shimron Hetmeyer(8)/Ravichandran Ashwin(9)/Antich Nortje(9)/Umesh Yadav(8.5): These are not a first choice captaincy options due to their specialist role as batsman or bowler. However, these can be accommodated in the matches when Delhi plays consecutive matches in a short span

Uncapped: Unless one of the Indian bowlers is not doing well, they can’t replace it with the uncapped bowler. Otherwise, the chances of an uncapped player featuring in mighty DC final XI is quite tough.