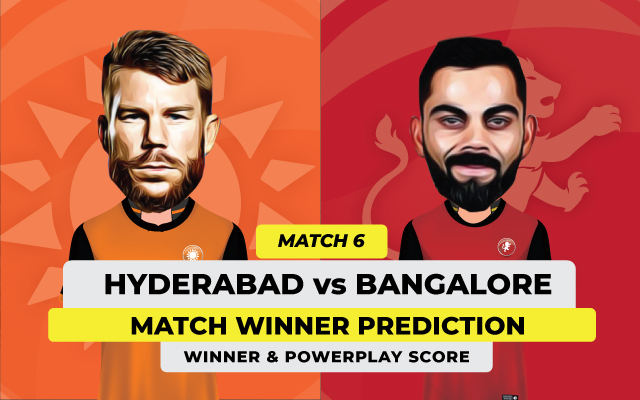 Royal Challengers Bangalore (RCB) made an incredible start to the 2021 Indian Premier League (IPL) after they beat defending champions Mumbai Indians (MI) by two wickets in Chennai. The game went down to the last ball and was a humdinger.

The Virat Kohli-led unit is now set to lock horns with the Sunrisers Hyderabad (SRH) on Wednesday, April 14 at the MA Chidambaram Stadium. The Sunrisers, on the other hand, didn’t make a great start to the tournament, losing to the Kolkata Knight Riders (KKR) by 10 runs at the Chepauk itself.

After they lost two early wickets in their run-chase, they were playing catch-up. Moreover, in Chennai, the Sunrisers are yet to win a single match. However, on the head-to-head count, David Warner’s men have a 10-7 lead over RCB.

The pitch at the Chepauk has been a fairly decent one for batting. The track has shown signs of slowing down, especially in the second half. Batting first should be the safer option. Scoring runs in the powerplay will be critical. There will be clouds but with around seven per cent chances of rain. The temperature will be around the 30 degrees Celsius mark.

AB de Villiers has more than decent numbers against the Sunrisers’ bowling attack. In 15 games, the veteran has notched 520 runs at an average and strike rate of 37.14 and 157.58 respectively. He also has five half-centuries to go with a top score of an unbeaten 89. If he gets going with the bat in hand, SRH could, well and truly, end up chasing leather.

Yuzvendra Chahal has reasonable numbers against the Sunrisers. In 53.1 overs, he has picked up 16 wickets at an economy of 7.74. Last year in Dubai, he picked up a three-wicket haul against them and also bagged the Player of the Match award. In the first game against MI, Chahal looked a tad out of sorts and he would be looking to make amends.