IPL 2022: Irfan Pathan picks his best XI of the tournament

IPL 2022: Irfan Pathan picks his best XI of the tournament

The 15th edition of the Indian Premier League was a grand celebration, especially with two new teams – Gujarat Titans and Lucknow Super Giants – joining this season. Both the teams made it into the playoffs in their first go, and the Titans lifted the prestigious silverware to sign off in style.

The season witnessed magnificent performances from some of the top players, but some new faces left everyone in the cricketing fraternity stunned with their performance on the big stage. Sharing thoughts on some of the finest performers of this season, former India all-rounder Irfan Pathan has named his Best XI of the IPL 2022.

Pathan’s lineup starts with Jos Buttler and KL Rahul in the opening slot. While the former, being a part of the Rajasthan Royals, finished with 863 runs in the season with four centuries and four half-centuries to his name, the latter finished with 616 runs, which included two centuries and four half-centuries. Both the players performed in the playoff stage, with Buttler making it to the finals with RR.

Pathan chose Rajasthan Royals skipper Sanju Samson for the No. 3 spot. Samson led his side into the finals of the IPL 2022, the first time the team entered the finals since the inaugural season. Samson’s composure with the bat was something to look out for this season, and though he managed to score only two half-centuries in 17 games, he played some crucial knocks accounting for the team’s victory.

Pathan’s middle-order batters include the IPL 2022 winning skipper Hardik Pandya, followed by Punjab Kings’ and GT’s prolific power-hitters Liam Livingstone and David Miller respectively. While Pandya was successful in leading his side to their maiden IPL title in their first-ever outing of the league, he was also a crucial all-rounder as he marked his return with the ball. Livingstone and Miller were the saviors for their team as they came out to bat when the side needed someone to anchor the innings and play the finisher’s role.

Pathan included two bowling all-rounders in his XI in the form of GT vice-captain Rashid Khan and Royal Challengers Bangalore’s Harshal Patel. Rashid ended up with 19 wickets this season in 16 matches, whereas Patel scalped the same number of wickets in 15 games. The spinner had a better economy, 6.60 as compared to Patel’s 7.66 this season, and both hold the ability to provide their team with the crucial wickets.

The bowling unit of Pathan’s line-up comprises the Titans’ pacer Mohammad Shami, Sunrisers Hyderabad speedster Umran Malik, Royals’ spinner Yuzvendra Chahal, and Delhi Capitals spinner Kuldeep Yadav as the 12th man. Being a part of the champions’ side, Shami scalped 20 wickets for the Titans this season.

On the other hand, Malik, who was also named the Emerging player of the season, impressed everyone with the ability to consistently clock deliveries at 150+ kmph. Chahal’s season was impressive as well, as he finished with 27 wickets under his belt, becoming the highest wicket-taker of the season. Yadav, who was benched by KKR the previous season, made a brilliant comeback and finished his season with 21 wickets and bagged the Player of the Match award four times in 14 games. 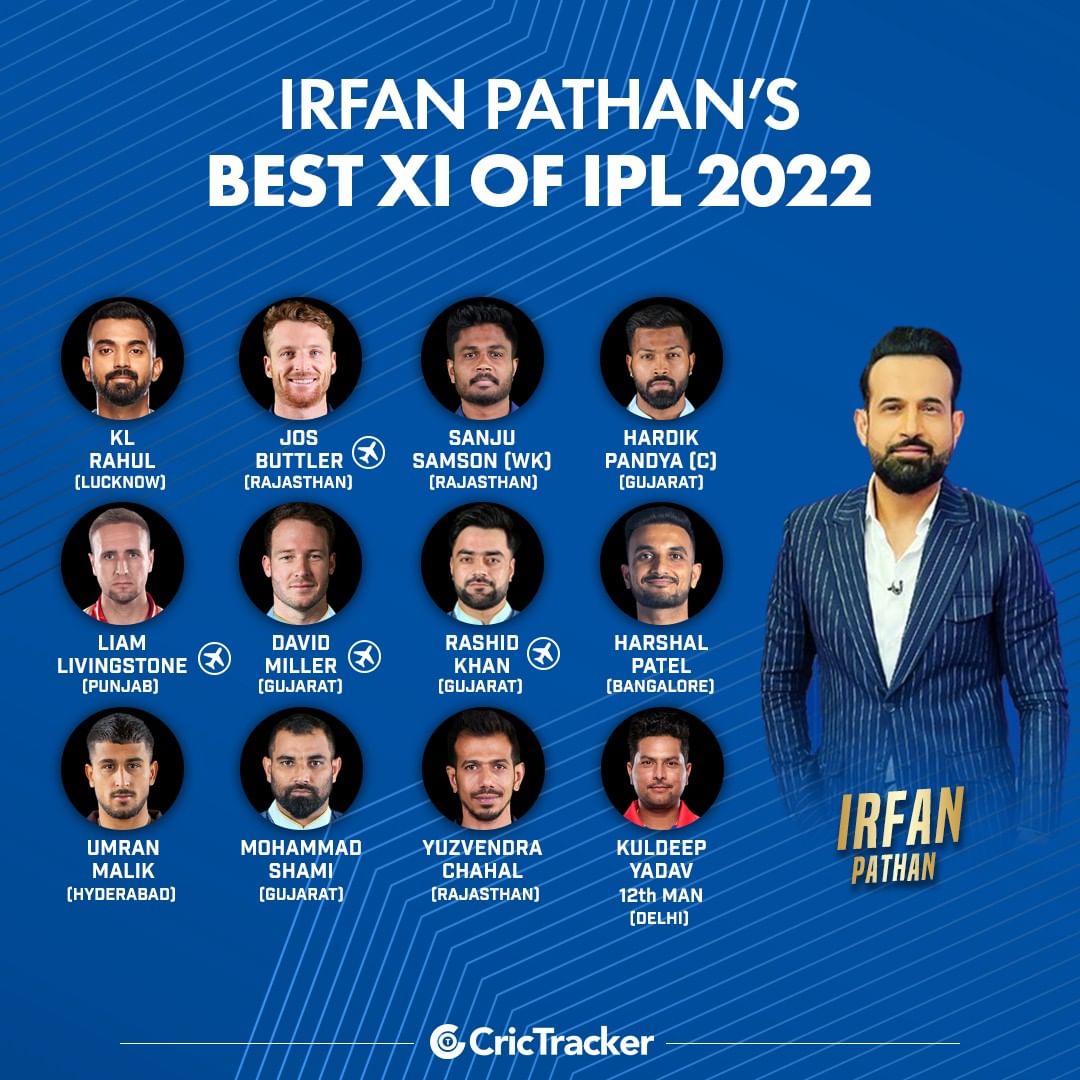 My IPL team for this season. What’s yours guys?? #IPL2022 pic.twitter.com/H8vFBLWRdm