Andre Russell starred with both bat and ball for the KKR side. 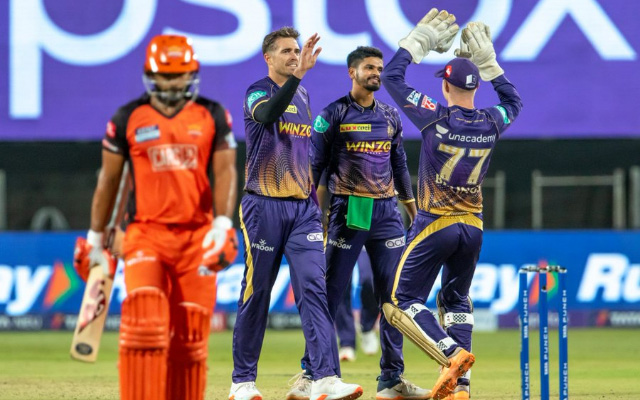 Sunrisers Hyderabad lost their fifth game in a row as they lost to Kolkata Knight Riders by 54 runs at the MCA Stadium in Pune. Their chances of making it to the playoffs remain very slim at the moment as this loss has put a huge dent on their net run rate. The Kane Williamson-led side has dropped down to the eighth position in the points table with five wins in 12 games.

KKR were on the money right from the toss as they chose to bat first and posted an excellent total of 177. Venkatesh Iyer (7) was dismissed early while Ajinkya Rahane (28) and Nitish Rana (26) stitched an excellent partnership for the second wicket to set the tone. However, in the 12th over, KKR were stuck at 94 for 5 and the likes of Andre Russell and Sam Billings stepped in at the right time.

The duo played very smartly, and Russell in particular took his time and capitalised on the bowling in the death overs to finish with an unbeaten 28-ball 49, which included four sixes and three fours. Billings played a good hand from the other end as well with a 29-ball 34 . Umran Malik (3/33) was the standout bowler for SRH.

In reply, SRH lost the wicket of Williamson (9) just before the end of the powerplay with 30 runs on the board. Abhishek Sharma continued his good show with a brisk 28-ball 43. Markram played a steady knock of 32 off 25, however, once he was dismissed, none of the SRH batters got going and Russell starred with the ball as well as he finished with 3 for 22 in his four-over spell while Tim Southee picked up two wickets.

I mean largely the first half was good. Dre Russ is always a threat. Showed his class. We tried to create partnerships but KKR were really good. We have been struggling with creating momentum in the last few games. Sundar stepped up in the last over. Using our resources a little early didn’t work for us today. We wanted to get off to a good start. We wanted to get some momentum. There were glimpses and signs but wasn’t to be. The run rate got up and we were not able to pull it back. The game teaches us lessons and I am learning it right now

The mindset we came up in this game, it was outstanding. All the boys did the right things, played fearless cricket. It was really important to win the toss. The teams batting first have won a lot of matches. Everything panned out really well. We were going over-by-over. The plan was to give Russell the strike as much as possible. We knew Washi had one over left, that was the over we were going to target. It worked out pretty well, hope it works out well in the final game as well. It was an over-par total. Sunil and Varun stepped-up, they bowled smart and got crucial wickets. We never allowed them to get under our skins, kudos to that. We have nothing to losing now. We haven’t played our A-game yet, that’s what I spoke today. When I took the CEO’s name, I wanted to say that he’s there to console the players who’ve been sitting out. It’s tough for us as well while picking teams.

When I went out to bat, when they were bowling into the wicket, it was a bit difficult. Our bowling attack pulled them back tonight. The mindset is very clear, I practice to go and do that from ball one. The first ball in the nets, I hit for sixes. I get my body ready for any situation, sometimes it might be tough. You have to tough it out at times and stay till the back end, happy tonight. Before the last ball of the 19th over was bowled, I said, “Sunil, try and get a boundary, but let me start the over with the spinner.” Offspinner to a right-hander, it’s like a kid in the candy shop. I got full tosses and I put it away. Hard work paid off today. Good to contribute in both aspects tonight. I’m just going to keep it going, hopefully we can qualify.

Full list of award winners from KKR vs SRH match:

Most Valuable asset of the match – Andre Russell