Which players should be picked for DC vs RCB match? 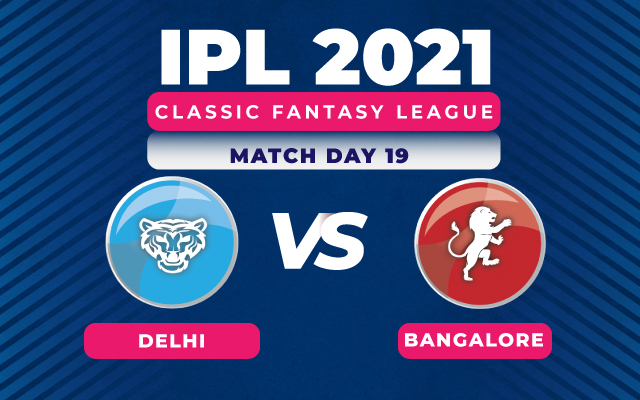 The 22nd match in this IPL 2021 season will start at 7:30 PM IST, between Delhi Capitals (DC) and Royal Challengers Bangalore (RCB) in Ahmedabad. In this article, let us discuss the Season Long Fantasy League team setup for Match 22.

This will be an exciting contest between both the teams who have just lost one match out of five played so far this season. RCB suffered their first defeat this season against CSK in the last match, courtesy Ravindra Jadeja’s all round performance. RCB’s bowling resources will get a hit due to the return of Kane Richardson to home country.

It’s important that Navdeep Saini and Dan Christian step up with their contributions. Delhi won in super over in their last match against SRH. For both these teams, this is the first match in Ahmedabad. Both these teams are going to play their next four matches in Ahmedabad before moving to their new venue.

Last match in Ahmedabad between PBKS vs KKR was a very low scoring match. So it is good to have mix of both bowling and batting options for this match.

Andre Russell (KKR), Shubman Gill (KKR), Nitish Rana (KKR): KKR players have been so disappointing this season. Also KKR plays their next match in four match span. We can bring one or two KKR players for their match if possible. Otherwise, we will wait till they hit the form to transfer to our fantasy team.

Rishabh Pant (DC): Rishabh Pant’s fireworks are still due this IPL season. When DC bats first, he is coming in the top order as well. Only while batting second, he is trying to be the finisher. Even though we have Shikhar Dhawan and Prithvi Shaw, we are still getting Rishabh Pant as we want to carry DC players for the next match mostly.

Kagiso Rabada (DC): Rabada is not at his usual best this season. He didn’t even complete his full bowling quota of four overs. However, in this match DC would look up to Rabada’s experience to contain the in-form RCB best batsmen. There is a lot of dew in second innings of the match, which makes it hard for the bowlers. So pick this bowler accordingly.

Virat Kohli (RCB) is a great captaincy pick for this match. He scored brilliantly in the recently concluded England Series in Ahmedabad venue. However Virat Kohli is expensive 12 Credits. So we could not accommodate him.

Devdutt Padikkal (RCB): He is in great form, striking aggressively with the bat. His batting position as an opener has a lot of fantasy potential.

Due to the due factor on this pitch, we want to captain the batsman from the team batting second. The other one will become the Vice Captain.