The Indian Premier League (IPL) has been a witness to several jaw-dropping performances by the batsmen. Moreover, the pitches dished out have favoured the batting side to a large extent. Meanwhile, the bowlers haplessly try their hearts out only to face the wrath of some lusty hitting by the opposition batsmen. The eleventh edition of the tournament has been no different.

The Kolkata Knight Riders (KKR) faced the Kings XI Punjab (KXIP) at the Holkar Stadium in Indore and managed to beat them by 31 runs. Dinesh Karthik’s men racked up a colossal score of 245/6 in 20 overs. Sunil Narine and Dinesh Karthik scored breezy half-centuries and was supported by cameos from the other batsmen. Subsequently, KKR reached a total, which turned out to be a bridge too far for Punjab.

The run-fests in the IPL

Meanwhile, it panned out to be the fourth highest team score in the history of the cash-rich tournament. The Royal Challengers Bangalore (RCB) feature thrice in the list and it doesn’t spring a surprise as they have always boasted of batsmen of the likes of AB de Villiers, Chris Gayle and Virat Kohli. The highest ever score of 263/5 was attributed by Gayle’s 175* against the Pune Warriors.

Kings XI Punjab (KXIP) also have their name three times. This time around, the franchise has Gayle, KL Rahul and Aaron Finch who have the ability to notch massive scores and breach the highest team totals. The Chennai Super Kings (CSK) have had one of the most formidable lineups ever since the inception of the T20 extravaganza. They have scored 240+ runs plus twice as well.

Even in the current season, they have been superlative with the willow. The likes of MS Dhoni and Suresh Raina have played since 2008 and have been a major reason why CSK have managed to get a substantial amount of runs on the board. 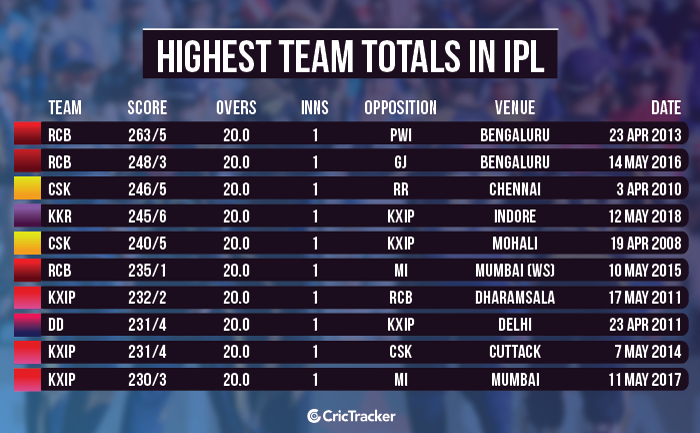