Rassie van der Dussen has an astonishing average of 80.9 in the ODIs. 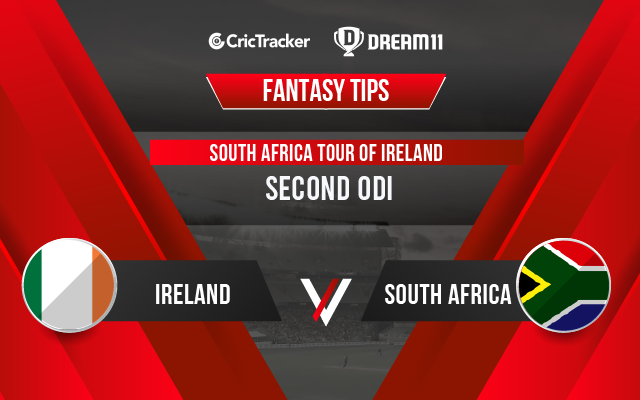 Ireland will take on South Africa in the 2nd ODI on Tuesday. The 1st ODI was called off due to rain. Despite unfavourable batting conditions, Ireland batters put up a decent score of 195 with the loss of 4 wickets in 40.2 overs. An 87 run-stand for the second wicket between William Porterfield and skipper Andrew Balbirnie was one of the main highlights.

Meanwhile, South Africa rested Quinton de Kock and Anrich Nortje in the 1st ODI. Kagiso Rabada and Lungi Ngidi asked a lot of questions to the Ireland batters in the initial overs. They will be aiming for better bowling performances from others in this match.

There will be plenty of swing and seam movement in the first hour of play and later the ball comes quite easily onto the bat. Not a lot of turn spinners can expect from this surface. The wicket will become completely flat in the 2nd half of the match, and hence, bowling first is a good option.

A player like MS Dhoni has got such a big presence in the game: Sam Curran

Every player in the team is ready for a last-minute call-up during the England series: Umesh Yadav

William Porterfield showed a lot of character in the 1st ODI and scored a half-century after 2 years. He played the spinners well, and made sweeps and reverse sweeps as his main scoring option. He ended his innings after scoring 63 runs from 87 balls.

Rassie van der Dussen is a reliable batter for South Africa in the middle-order. He has accumulated 890 runs in 24 ODI matches at an impeccable average of 80.9, which includes one century and 8 half-centuries.

Mark Adair has promoted up the order in the 1st ODI and he hit two sixes in his innings of 16 runs. He bowls at a good pace as well and has picked up 17 wickets in his ODI career.

Andile Phehlukwayo gave South Africa a crucial breakthrough in the 1st ODI by dismissing Paul Stirling for 13 runs. He is a decent batter down the order and has 649 runs to his name in his ODI career.

Joshua Little had a good series against the Netherlands with the ball, where he picked up 8 wickets in 3 matches. Overall in his ODI career, he has scalped 19 wickets, with the best figures of 4 for 39.

Kagiso Rabada bowled quite well with the ball in the 1st ODI and troubled the Irish openers, but went wicketless initially. However, later on, he scalped the important wickets of Andy Balbirnie and Harry Tector.

Lorcan Tucker has played 20 ODIs for Ireland and scored 345 runs at an average of 21.56, with the highest score of 83. He has also affected 31 dismissals behind the stumps.

Andrew Balbirnie played a responsible knock in the 1st ODI. He was the top scorer for Ireland with 65 runs, which includes 6 fours. It’s worth a risk and you can pick him as your fantasy skipper.

Janneman Malan averages 74 in the 4 innings he has played in the ODIs, which includes one century and a half-century. You can take a risk and pick him as your Dream11 fantasy team skipper.

Andy McBrine did not have a great time in the series against the Netherlands. He picked up only three wickets and also couldn’t contribute much with the bat. There are better options available from Ireland.