Harry Tector and Janneman Malan are useful picks for your fantasy teams. 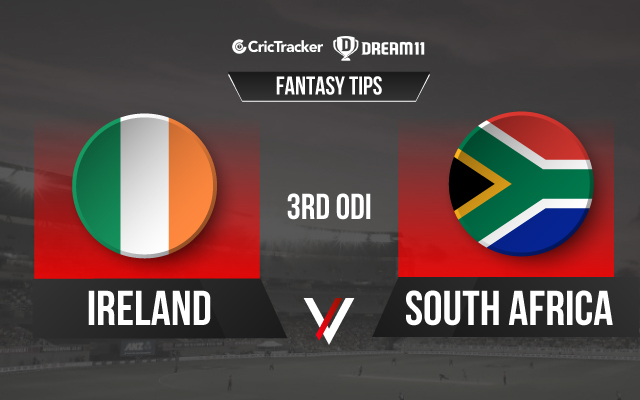 Ireland created history by defeating South Africa for the 1st time in the ODIs. They are just one step away from winning the series. Completely dominating performances both with the bat and ball gave them a 43-run victory in the 2nd ODI. Veteran batter William Porterfield missed the 2nd ODI due a fractured finger, but he is likely to play in the 3rd ODI.

South African bowlers leaked many runs in the death overs and an inexperienced middle-order made them lose the 2nd ODI. They now find themselves under all sorts of pressure to win the 3rd ODI, so as to level the series 1-1. Quinton de Kock, who was rested for the first 2 ODIs, is expected to play in this match.

The ball is coming quite well onto the bat. Playing straight will give batters more chance of scoring runs on this wicket. Overall, it’s a good competitive surface and anything over 280 puts the team batting first in the driver’s seat.

Irish skipper Andrew Balbirnie is in sublime form at the moment. With one half-century and a century, he has scored 167 runs in this series at an average of 83.5.

Janneman Malan played some really good shots in the 2nd ODI and scored his second ODI half-century. He played a lose shot and got dismissed when he was well set on 84 runs.

George Dockrell gave hosts a perfect finish to the innings in the 2nd ODI with some clean hitting at the death. He got out in the final ball of the innings, after scoring 45 runs from just 23 balls. With the ball, he picked up the important wicket of Janneman Malan.

Despite going for runs, Andile Phehlukwayo chipped in with two wickets in the 2nd ODI. If he can contribute with some runs with the bat, it will surely make him a perfect all-rounder for this format.

Andrew McBrine is providing breakthroughs at crucial intervals. He picked up 2 wickets at an important stage of the match in the 2nd ODI. He can be utilized as a batter up the order as well.

Kyle Verreynne is likely to be backed to play in the 3rd ODI. He has played only 6 ODI matches, but has scored 176 runs in 5 innings at an average of 35.2, with the highest score of 62.

Harry Tector played exceptionally well in both matches. He took a world-class bowling attack to the cleaners in the last game and scored vital runs for his side. It’s worth a risk to pick him as your fantasy team skipper.

Aiden Markram is a stylish batter, but has not been able to play to his fullest potential in this series. You can take a risk and pick him as your fantasy team skipper.

Considering there are too many options in the bowlers’ slot, it’s quite difficult to find a place for Craig Young in the final eleven.