Zimbabwe have struggled with the team combination in this series. 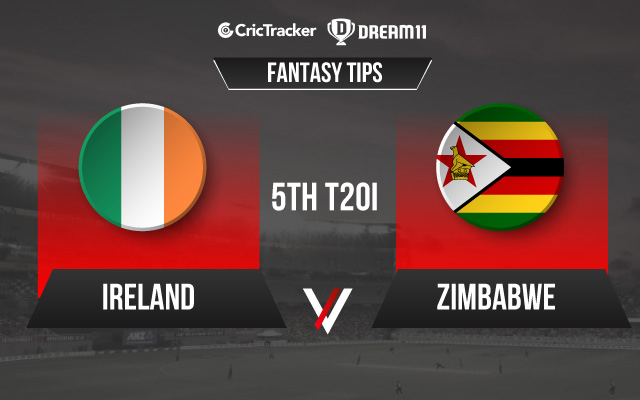 Ireland have already wrapped up the 5-match series with a convincing 64-run victory in the 4th T20I. Openers Paul Stirling and Kevin O’Brien are in scintillating form, and the duo has played a vital role in Ireland’s series triumph. Ireland will now be aiming for the fourth straight victory in this series.

On the other hand, Zimbabwe started well this series with a 3-run victory, but later on, the batters let them down. As a result, they lost 3 matches in a row and lost the serties. They need to win this match to reduce the margin of loss to 3-2.

The key on this surface is to play long, and the Ireland batters did the same in the last 2 matches. The wicket will get slower as the game progresses, and hence, batting first is a preferable option.

Also Read: ENG vs IND: Either Mohammed Siraj is carrying a niggle or he is tired, says VVS Laxman

Paul Stirling will remember this series for a long time, as everything has gone in his favour. He scored his first T20I century in the third match of the series. Overall in this series, he has amassed 215 runs at an average of 71.66 and a strike rate of 137.82.

Craig Ervine is the leading run-scorer for Zimbabwe in this series, with 93 runs in 4 matches at an average of 23.25. He has the highest score of 33.

Shane Getkate has made a huge impact in this series with the ball. He has scalped 8 wickets at an economy of 6.21 and has even scored 36 runs with the bat.

Mark Adair rattled the Zimbabwean top order in the fourth T20I with the new ball. He picked up 4 wickets and took his total tally of wickets to 7 in this series.

Luke Jongwe is a decent budget option for your fantasy teams. He has picked up 4 wickets in 4 matches at an economy of 7.2 and has scored 33 runs with the bat as well.

Regis Chakabva hasn’t played up to the expectations in this series. He has managed to score 75 runs in 4 matches so far at an average of 18.75. He is expected to do well in the final T20I.

IRE vs ZIM Must Picks for Dream11 Fantasy Cricket:

After initial struggle in this series, Andrew Balbirnie put up a strong show in the last 2 matches, which is a positive sign for Ireland. It’s worth a risk and you can pick him as your fantasy team skipper.

Milton Shumba has scored 65 runs in 4 matches so far in this series. You can take a risk and pick him as your fantasy team skipper.

Neil Rock doesn’t get much opportunities to bat, and he has batted only once in this series. It’s better to avoid him while making your fantasy teams.