The Tigers got the better of the Windies on both occasions in the series.

Bangladesh has arguably been the most dominant team in the ongoing triangular ODI series. The Mashrafe Mortaza-led unit is the only unbeaten team and hasn’t had to strain in any of their three victories thus far. Their batting, especially the top order has looked ominous and the bowling unit has also stepped up with the likes of Mustafizur Rahman, Abu Jayed and the skipper amongst the wickets.

The Final will be a different ball game altogether and the Tigers will play it against the Windies on Friday at The Village in Dublin. In the league stage, Bangladesh got the better of the Caribbean team on two instances and is again deemed to be the favourites in the all-important encounter. The Windies don’t seem to be in great shape with some of their big names not taking part in the tournament.

The Final of the Ireland Tri-Nation series between Ireland and Bangladesh will be hosted by The Village in Dublin.

After a few sunny days, the rain may come back in tomorrow’s game. There are chances of a heavy downpour from the morning itself. The clouds will hover above the ground throughout. The temperature will be around the 13 degrees Celsius mark. The humidity will be in the 50s.

The track at The Village is speculated to be another batting-friendly one. Bowlers won’t get much assistance from the deck. All the three matches in the tournament at the venue were won by the team, batting second.

Shakib Al Hasan developed a side strain and the management may not want to risk him ahead of the World Cup.

Mustafizur Rahman at The Village: 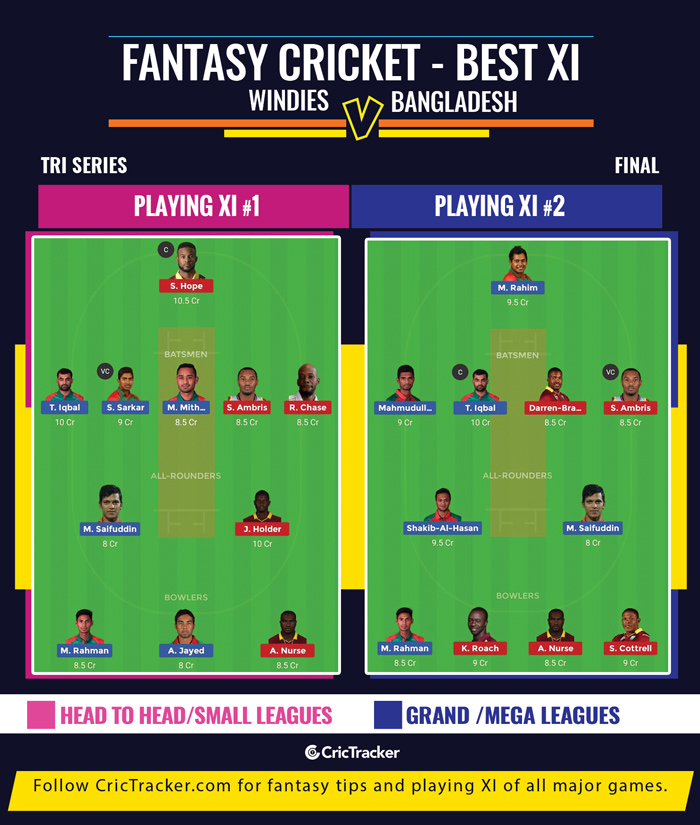 Mohammad Mithun played well in the last match versus the Windies, batting at five. Once can take the risk of including him.

Bangladesh is most likely to end the tournament unbeaten.