In the recent few ODIs at the venue, the pitch has mostly helped the team, batting first.

After a poor outing in the warm-up match, Bangladesh showed grit and determination to beat Windies by eight wickets at the Grange Cricket Club Ground in Dublin. Their bowlers bowled brilliantly in the death to restrict the Caribbean batsmen to 261. Openers Soumya Sarkar and Tamim Iqbal along with Shakib Al Hasan then scored half-centuries and took the sting out of Jason Holder & Co.

Mashrafe Mortaza’s men are next scheduled to play against William Porterfield’s Ireland at The Village in Dublin. The hosts, on the contrary, slumped to a shambolic 196-run defeat versus the Windies. Their bowling was awful, to say the least as the likes of John Campbell and Shai Hope unfolded utter mayhem in the Irish camp. Ireland’s task won’t be easy against an in-form Bangladesh team.

The 3rd game of the Ireland Tri-Nation between Ireland and Bangladesh will be hosted by The Village in Dublin.

The atmosphere is expected to be gloomy with the temperature around the 7-degree mark. There is a forecast of rain throughout the day. The humidity will be in the 80s.

The deck has produced some high scoring affairs and some low-scoring games as well. However, bearing in mind the nature of the pitches in the ongoing tri-series, the strip for tomorrow can be good for batting as well. Out of 11 completed ODIs, five games were won by the team batting first.

Tamim Iqbal vs Ireland in ODIs: 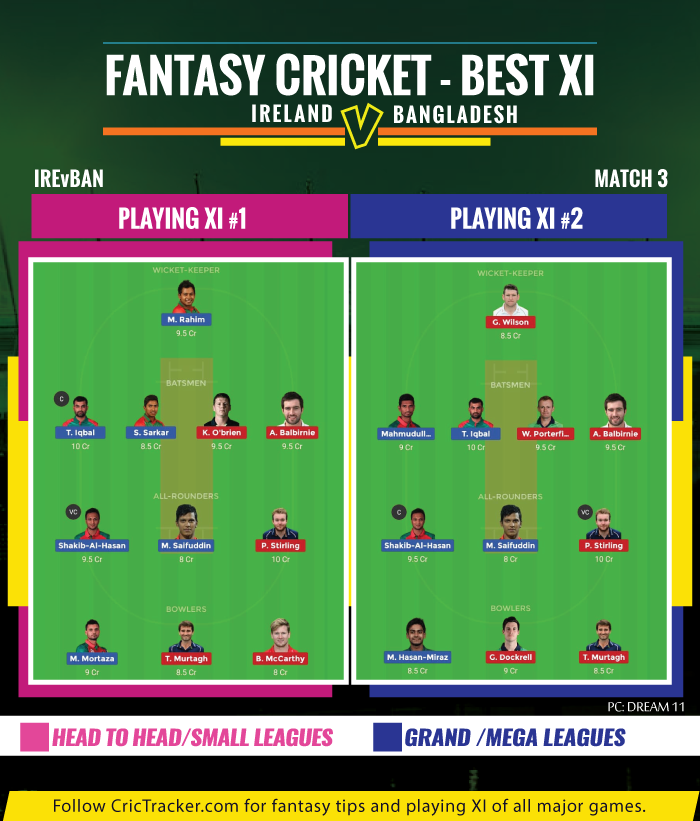 It’s tough to pick early wickets in Dublin and hence, pick batsmen from the top order. Also, pick more Bangladesh bowlers keeping in mind the form of the Irish batsmen.