Both the team are clashing on Wednesday 15th May at 3:15 PM IST at the Clontarf Cricket Club Ground in Dublin.

Bangladesh has been in great form against both West Indies and Ireland at the Ireland Tri-Nation series. Ireland will look to retrieve some pride while Bangladesh will look to gather some more energy in the 6th match of the series tomorrow. Both the team are clashing on Wednesday 15th May at 3:15 PM IST at the Clontarf Cricket Club Ground in Dublin. Glance on the statistics below which can help you to pick your 11Wickets fantasy XI.

Clontarf Cricket Club Ground in Dublin is a pitch for the batsmen. Also, it offers good conditions for the pace bowlers and there is ample swing. Whoever wins the toss, should bat first in this pitch.

The Irish batting squad performed still better in the last match against West Indies in the series. If they want to finish at a good note, they need to continue their batting performance. Paul Stirling scored 77 in the last time and ensured a good start of his side. William Porterfield and Andrew Balbirnie come out with their potential. The bowling department have been looking flat so far in the series. It will be crucial that Tim Murtagh, Joshua Little and Boyd Rankin bowl well to the Bangladeshi batsmen tomorrow.

Bangladesh has been quite impressive with both bat and ball in this series. They will try to give another all-round performance in the last league match of the series tomorrow. Their top order-batting squad is looking much stronger in this series. Tamim scored 80 in the first match. Sarkar is scoring back-to-back half-centuries. Mortazaq and Hasan have done well with the ball. Mustafizur Rahman have taken four wickets in the last match and given a brilliant performance.

Both the teams have played 10 ODI matches together earlier, out of which Ireland succeeded in winning just 2 games while Bangladesh has won 6. One ODI match brought No Result and one was abandoned during this series. 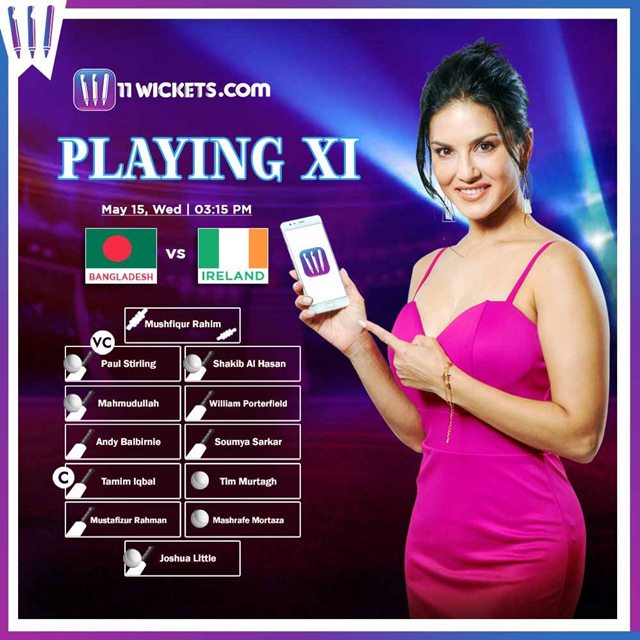 Bangladesh has already confirmed their spot in final.

Ireland has nothing to lose now, they can play fearless cricket that might work in their favour.

The Tigers are on the superior side in every department of the game and fans can expect them to win this match as well.