Bangladesh are unbeaten in the ODI tournament.

Last night, Bangladesh beat Windies by five wickets and qualified for the final of the Tri-Nation ODI series. On a decent batting wicket, the likes of Mashrafe Mortaza and Mustafizur Rahman restricted the Caribbean batting to 247. Thereafter, half-centuries from Soumya Sarkar and Mushfiqur Rahim guided the Tigers home with 16 deliveries to spare. Bangladesh has 10 points with a NRR of +0.465.

It also means that irrespective of the result of the last league game, Mortaza’s men will finish atop the points table. In the meantime, after yesterday’s encounter, Ireland was knocked out of the series. William Porterfield & Co have nothing, but pride to play for now. The last game of the league is scheduled to be played tomorrow between Ireland and Bangladesh at the Clontarf Cricket Club Ground in Dublin.

The first two games of the tri-nation series were played at this venue and the bowlers had to strain hard on the strip. Windies racked up 381 in the first game here and the numbers are a testament to the batting-friendly nature of the deck. Fielding first after winning the toss seems to be the wisest decision, at least for the time being.

There is no forecast of a downpour for tomorrow’s contest in Dublin. The temperature will be around 16 degrees Celsius. There will be a bit of a cloud cover, but it’s not expected to create a hindrance. The humidity won’t be on the higher side either.

Ireland may give Andy McBrine a chance in place of George Dockrell, who hasn’t picked up a wicket thus far, giving away runs at an economy rate of 6.87. Dockrell hasn’t had much to do with the bat either. James McCollum scored a ton versus Bangladesh in the warm-ups and he will be keen to deliver. The onus will also be on the likes of Stirling, Porterfield and Kevin O’Brien to steady the ship.

Abu Jayed didn’t have the greatest of ODI debuts as he conceded 56 runs in his nine overs. Taskin Ahmed may get a go in the inconsequential match. Rubel Hossain has only played one ODI in 2019 and the management would want to give him some match-time. Mustafizur Rahman’s return to form comes as a massive relief for the Tigers. Overall, Bangladesh should be happy with how the team has come along. 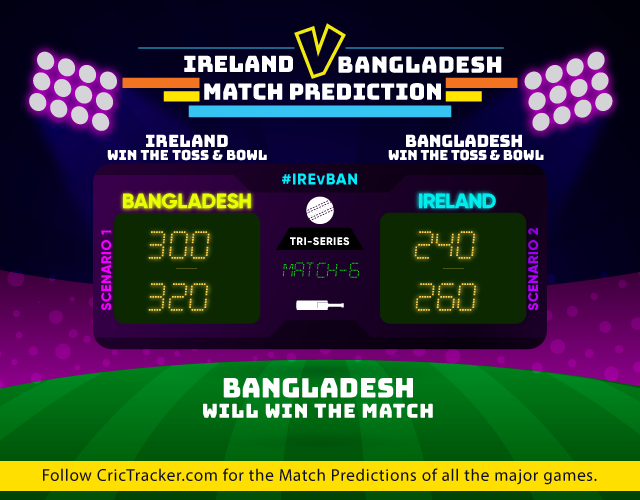