Paul Stirling is coming off a productive season for Middlesex in T20 Blast.

After the postponement of the Euro T20 Slam, the European neighbours in Ireland, Scotland, and the Netherlands will battle it out in a T20I tri-nation series as they build towards next months T20 World Cup qualifiers.

The first match will see hosts Ireland lock horns with Dutch at The Village in Dublin on September 15. The match will kick off at 06:00 PM IST and will be streamed live by Ireland Cricket.

The cancellation of the Euro T20 slam gives a chance to countries like Ireland, Netherland, and Scotland to square off in a T20I tri-nation series; one that will allow them to prepare for next months T20 World Cup qualifiers. The first match will see hosts Ireland take on the Dutch at The Village in Dublin.

The last time these two sides’ met, Ireland pulled off a sensational last-ball win. That was in Oman during a quadrangular tournament but since then, Ireland’s form has been abysmal, to say the least. The hosts have won just one of their last five completed T20Is and have suffered the ignominy of getting whitewashed by Afghanistan [0-3].

The Netherlands, on the other hand, also drew a series against Zimbabwe [1-1] before getting hammered 0-4 by the UAE. The Dutch will look to do an encore of what they did the last time these two sides were involved in a tri-series: beat the Irish twice at Rotterdam.

According to the weather report, there are 35-40 per cent chances of a shower at The Village.

The last time Ireland played a T20I at The Village, their bowlers were hammered to the tune of 4-213 by a rampaging Indian batting line-up. The average first innings score at this pitch during the course of the 9 T20Is though is 144. The sides batting second have won on six occasions out of nine and with the predictions of rain on Sunday, both captains would be tempted to bowl first.

Ireland has recalled legspinner, Jacob Mulder, while uncapped Harry Tector and David Delany have received maiden call-ups to the national side.

Ireland: Andrew Balbarine has stroked 81 and 90 in two of his last three innings against the Dutch. He will once again be the lynchpin for the Irish alongside Paul Stirling, who is coming off a productive season for Middlesex in T20 Blast. Mark Adair, who claimed 4-40 in Ireland’s most recent win before scoring a 15-ball-38, could be a great pick for the all-rounder’s spot.

Netherlands: Tobias Visee was in the swashbuckling striking form (S/R- 161.82 in 14 games) during the recently concluded Global Canada T20 while Max O’Dowd is coming off a stellar show against Zimbabwe and the UAE, scoring two half-centuries in four games. 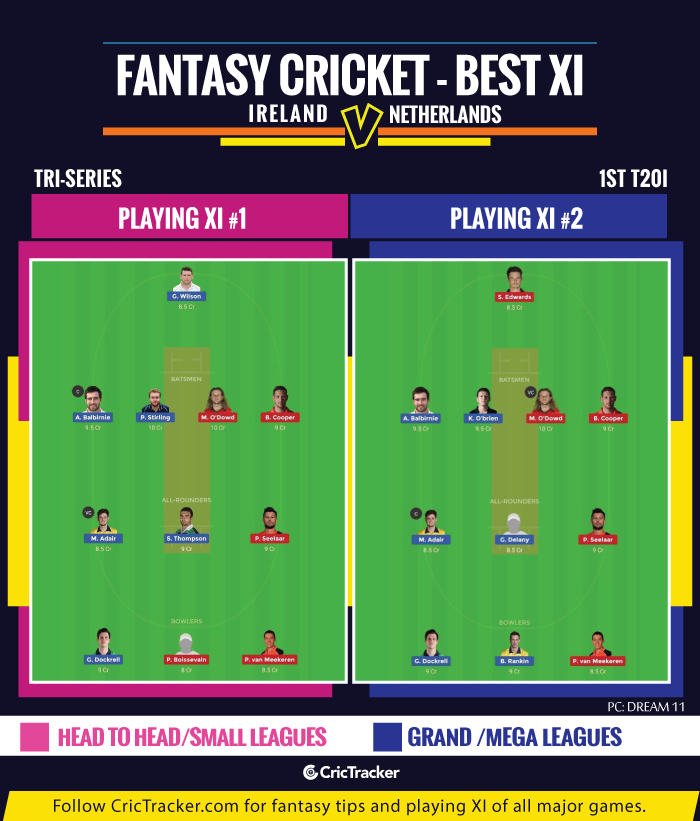 With all-rounders contributing in both the facets of play, it would be advisable to pick likes of Adair as the captain/vice-captain of your team.

Considering both sides aren’t coming from the best of form, it should be a well-contested encounter. But, considering Netherlands record of five wins and three defeats over their hosts, they’ll go in as slight favourites in this game.