24 completed matches have been played at the venue out of which 13 were won by the team, batting second.

Prior to the World Cup, Afghanistan is now set to play its last set of ODIs against Ireland at the Civil Service Cricket Club in Belfast. Gulbadin Naib was earlier appointed as the ODI skipper, removing Asghar Afghan and he guided his team to a victory by two runs (D/L Method) versus Scotland in Edinburgh. Rahmat Shah’s 113 off 115 deliveries saved the day for Afghanistan at the Grange Cricket Club.

Ireland, on the other hand, had a rather disastrous ODI series where it played Bangladesh and the Windies. The Irishmen also lost all their completed games and looked out of touch from all the aspects. The side will be looking to make amends after the disappointing outings. Last time when these teams met in Dehradun for a five-match ODI series, the series was levelled 2-2 with one game getting washed out.

The track doesn’t have a history of producing overly high-scoring encounters. A competitive battle between bat and ball can be expected tomorrow. 24 completed matches have been played at the venue out of which 13 were won by the team batting second. It won’t be a surprise if the teams, opt for fielding after winning the toss.

There is a slight chance of rain for tomorrow’s game, especially during the afternoon. The clouds will be over the stadium throughout. The temperature will be around the 14 degrees Celsius mark with the humidity percentage around the 70-mark.

The hosts may persist with James McCollum at the top of the order despite his poor form. He’ll keep opening with Paul Stirling, who had an incredible tri-series with the bat. William Porterfield’s return to form comes as a massive boost for Ireland. The home team is likely to go with a four-man pace attack that includes Rankin, Adair, McCarthy and Murtagh. George Dockrell is the lone spinner.

The Afghans may want to give Noor Ali Zadran a chance at the top of the order in place of Hazratullah Zazai, who’s been a regular fixture of the national team. Mohammad Nabi and Rashid Khan missed out the previous series but will be playing this time around. Hamid Hassan is most likely to play after impressing in his comeback game. There might be a toss-up between Aftab Alam and Mujeeb Ur Rahman.

The prediction is for Afghanistan to win the contest. 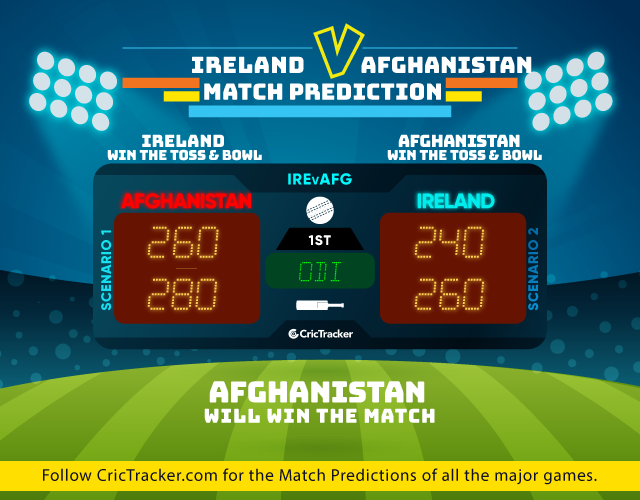