Paul Stirling is in great form with the bat and could be made the captain.

Afghanistan were given a late reality check by Ireland in the first ODI on Sunday. A 72-run loss in the series opener must’ve made the Asian team realise that they can’t take things for granted in the World Cup as well. Afghanistan are a side which learns and evolves quickly and they have only one game to do it now before heading to England. Ireland, however, will be high on confidence after registering their first win of the summer and will be keen on making it 2-0 and win the series.

Afghanistan would be thinking of not making a wholesale of changes and give their batsmen yet another chance to come to the terms with the conditions. If the overcast conditions appear during the World Cup as well, they would be better prepared for the challenge. Having said that, a more experienced Hamid Hassan could get a go in this game. Ireland won’t be looking to change the winning combination and hope for a similar outing again.

The second ODI of the two-match series between Ireland and Afghanistan will be hosted by the Civil Service Cricket Club in Belfast.

Though it will be cloudy throughout the day in Belfast, there won’t be much rain. A shower might interrupt the game once but that shouldn’t be a concern at all. There is only a 7% chance of rain. The temperature will hover around 12-14 Degrees Celsius.

Once again, the score around 250 would be par on this pitch. The first ODI saw more assistance to fast bowlers but that might not be the case in this game with better conditions on offer. It will also be interesting to see what teams will do after winning the toss.

Paul Stirling vs Afghanistan in ODIs: 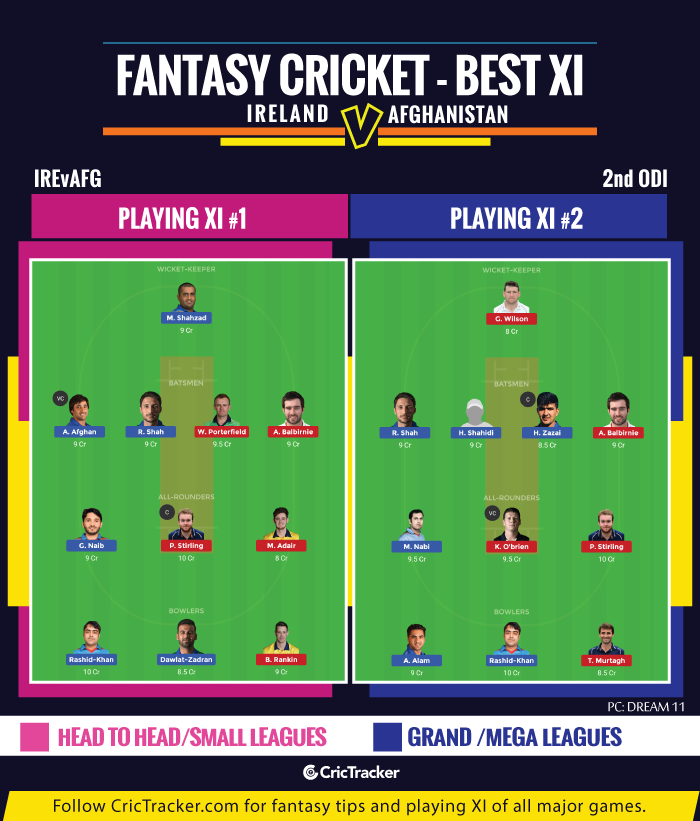 Don’t go by the performances in the previous game and keep faith in Afghanistan batsmen.

Fancy taking a risk? Make Mark Adair either captain or vice-captain. He looks a decent bet if conditions are helpful.

Afghanistan are expected to level the series but it won’t be easy as Ireland will be eyeing a series win.