Gulbadin Naib needs to inspire his batsmen to put up a more intense shift as they seemed pretty motiveless and lackluster in the first ODI.

The cricketing summer began on a rough note for Ireland, who lost all of their first few games, even a few which they deserved to win. Fortunes have not favoured them a lot lately but good performance can always shadow the power of fortunes, which is exactly what they showed in the first ODI against Afghanistan.

They were clinical right from the get-go on a track which didn’t offer a lot to the batsmen. Their fast bowlers ran riot in the second innings, giving the visiting batsmen no gifts to take home. Yet, one can never disregard how strong a unit Afghanistan is and a completely opposite result is very well possible.

Gulbadin Naib needs to inspire his batsmen to put up a more intense shift as they seemed pretty motiveless and lacklustre in the first ODI. This could come back to haunt them in the World Cup if not rectified soon enough and surely, there are good enough talents in their ranks who can deliver a top class batting performance.

The fast bowlers might continue to get some assistance in Belfast, just the way it happened in the first game. The quicks will have to bowl in the right areas anyways to reap the best reward. The weather will remain cloudy and there is a hint of a chance for the rain gods to interrupt the play.

Ireland is expected to enter this game with the same XI and also the same batting lineup. James McCollum, despite his failures, will get another go. William Porterfield getting among the runs is a huge bonus for the side. The fast bowling quartet of Mark Adair, Barry McCarthy, Boyd Rankin and Tim Murtagh worked wonders in the previous game and the presence of a capable part-timer in Kevin O’Brien is always an advantage.

They have two of the most destructive openers in Mohammad Shahzad and Hazratullah Zazai, but neither is consistent. Rahmat Shah provides a good variety in the middle order but he needs some good support from his other mates. Their bowling unit as always will be heavily dependent on the three spinners Nabi, Rashid and Mujeeb. Aftab Alam and Dawlat Zadran did a good job in the previous game and will be keen to deliver another good show.

Afghanistan is expected to pip the hosts in this contest. 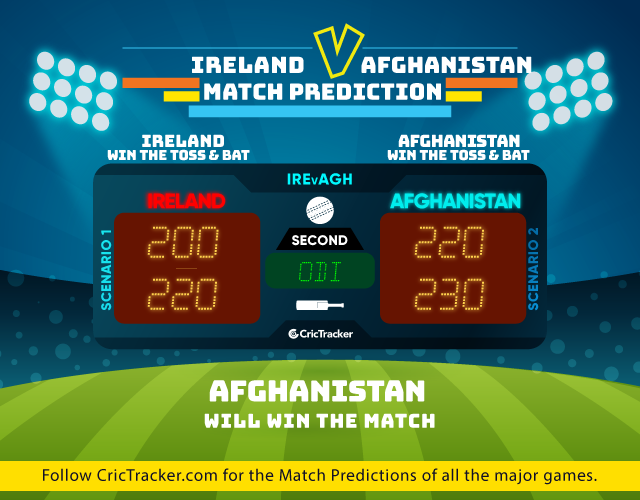