Eoin Morgan is averaging 98.66 across his last ten innings in the ODI format.

England will be taking on Ireland in the one-off ODI match on Friday at the Malahide in Dublin ahead of their home series against Pakistan. The availability and fitness of the players have hit England hard as Jason Roy caught an injury while Alex Hales withdrew himself from all ECB squads. The England team further rested Jonny Bairstow who was brilliant during his maiden stint at the IPL for the Sunrisers Hyderabad. This meant the No.1 ranked ODI team is set to field a new opening pair.

On the other hand, Ireland has everything to take away with respect to the result of this game. The Irish team missed out on the World Cup berth following their failures in the Qualifier tournament last year. The William Porterfield-led team will be hoping to defeat the England team for the first time since the famous 2011 CWC match. Earlier in 2018, the Scotland team got better off England team in a one-off ODI. This could boost the confidence of the newest Test-playing nation, Ireland.

The broadcast of this game in India is yet to be confirmed.

This venue in Dublin has recorded some big total in the ODI format in the last three years. However, most of them were when Ireland bowled first against a stronger opponent. If England bat first on Friday, a total of 350+ is expected to be on cards.

The England skipper Eoin Morgan has been in tremendous touch heading into the World Cup. In his previous ten ODI innings, Morgan aggregated 592 runs at a Bradmanesque average of 98.66. He scored a century and six fifties in those ten innings. Morgan’s score of 18 in the last ODI against the Windies is the only instance of him getting out without scoring a fifty in his previous ten innings.

James Vince could be the top performer if England bats first or Ireland ends up with a solid score on the board. He scored 430 runs across six innings he batted in the Royal London One-Day Cup including a record 190-run knock. Jofra Archer’s pace could be too tough to handle for the Irish batsmen and he would be an ideal multiplier option if the home team bats first. 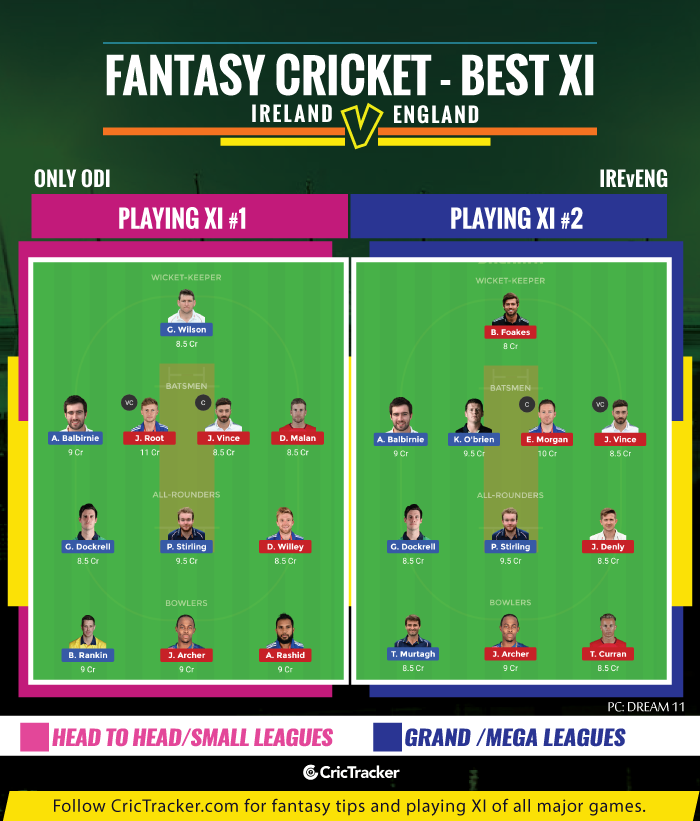 England is expected to cruise through the Ireland team in this one-off ODI fixture.