The Malinga-Bumrah duo proved to be quite a force at the death.

It was a massive encounter for both the Mumbai Indians (MI) and Sunrisers Hyderabad (SRH) when they met each other at the Wankhede. While the former was one game away from qualification, the Hyderabad needed a win at all costs to make their grip in the top four firmer. In this nail-biting battle, it was a sluggish knock from Quinton de Kock that prevailed and overpowered that of Manish Pandey.

The death bowling of the Mumbai Indians was exceptional in this match. Jasprit Bumrah and Lasith Malinga were terrific as they helped the home team become the third make it to the playoffs. It all boiled down to the Super Over as Manish Pandey smashed a six off the final ball of the innings. Bumrah was brilliant in the super over as well. Thus, it was a cakewalk for MI in the super over. SRH’s chances of making it to the playoffs get that much sleeker now.

The Mumbai Indians stunned everyone with their decision to bat first in this game. To their misery, the openers got them off to an extremely slow start. Not many runs came in the powerplay and Rohit Sharma was dismissed for 24 in the sixth over. Suryakumar Yadav looked to be aggressive but hit one straight to the fielder at deep cover after scoring 23 runs.

While Evin Lewis could score just one run, Hardik Pandya wasn’t able to do much of damage either. The all-rounder looked threatening with his 10-ball 18 but a well-directed short ball from Bhuvneshwar Kumar got the better of him. De Kock, though, absorbed the pressure and anchored the innings from one end. Even though he couldn’t score at a great pace, his knock was quite valuable for his team. The South African remained unbeaten on 69 from 58 balls as the hosts got to a decent score of 162/5.

As far as the powerplay was concerned, SRH didn’t seem to miss David Warner. Wriddhiman Saha and Martin Guptill got the team off to a lightning start scoring 40 runs in the first four overs. But once the wickets started falling, they clearly missed their man from Australia. While Saha got out for 25, Guptill walked back for 15. Krunal Pandya bowled an excellent spell in the middle overs and dismissed Kane Williamson first for 3 runs.

Vijay Shankar, after crawling his way to 12 runs from 17 balls, got out to the left-arm spinner. His brother Hardik also joined the act to dismiss Abhishek Sharma for just 12 runs. Manish Pandey, however, kept SRH in the hunt. With some support from Mohammad Nabi, he played some exceptional cricket and kept the fans on the edge of their seats. The game boiled down right till the final ball of the second innings. Sunrisers needed 6 runs off the final ball to take it into the super over. Pandey, magically, smashed a six off Pandya and brought joy to the SRH camp.

It was the second Super Over of this season and the visitors had to bat first. However, Manish Pandey was run out right on the first ball. Guptill picked a single on the second ball and Nabi smashed the third for a six. However, Jasprit Bumrah got the Afghan bowled on the fourth ball. Thus, SRH could only get 8 runs in the Super Over.

In the chase, Hardik Pandya hit the first ball for a six bringing the margin down to just 3 runs from 5 balls. He picked up a single off the second ball while Kieron Pollard took a two to finish the game off for his team. Mumbai Indians are now placed on the second spot on the points table.

Man of the Match: Jasprit Bumrah 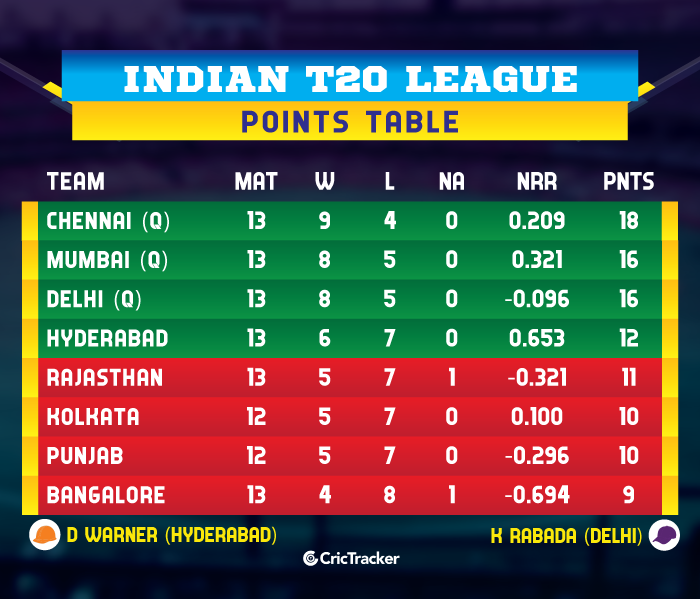