In 16 completed T20Is in Belfast, the chasing teams have a win percentage of 75.

South Africa were pretty comprehensive in their opening T20I against Ireland on July 19 at The Village in Dublin. Tabraiz Shamsi carried on with his impressive run of form. His four-wicket haul guided the Proteas to a 33-run victory and also gave the visitors a crucial 1-0 lead in the series.

Ireland, on the other hand, did a reasonable job with the ball but flattered to deceive in their run-chase. They were reduced to 88 for nine before being restricted to 132. The second game of the series is scheduled to take place on Thursday, July 22 and the hosts will be looking for the equaliser.

The pitch in Belfast hasn’t been overly batting friendly. But the scores might have been on the lower side since the associate nations have mostly played there. The upcoming game is expected to produce higher scores than what the average score suggests. The strip has favoured the chasing teams mostly and hence, batting second should be the way forward.

Quinton de Kock has been at his fluent best in recent times. After being the leading run-scorer in the West Indies T20Is, he smashed a century in the only ODI he played against Ireland. In the opening T20I, he smashed 20 runs off nine balls with three fours and a six and played at a strike rate of 222.22. If he gets going, the Irish bowlers will be in for a lot of trouble.

Tabraiz Shamsi has been unstoppable in recent times. After bagging the Player of the Series award in the West Indies T20Is, he bowled well in the Ireland ODIs as well. In the first T20I against the Irishmen, he bowled another magical spell to show his class at the highest level. The hosts’ batters need to play him with caution and not give him wickets in the middle overs. 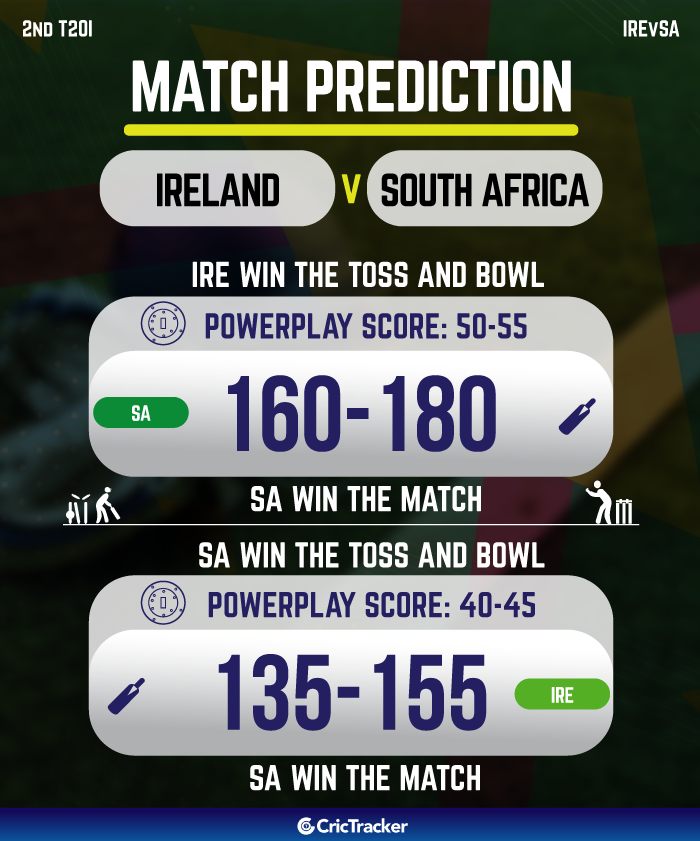