The hosts have been reasonable with the ball, but their batting has looked lacklustre.

South Africa have already sealed the fate of the three-match T20I series against Ireland. On Thursday, July 22, the Temba Bavuma-led unit beat the hosts by 42 runs to take a 2-0 lead in the series. In the previous game, David Miller, Tabraiz Shamsi and Bjorn Fortuin saved the day for the Proteas.

The third and final game of the series is scheduled to take place on Saturday, July 24 at Belfast’s Civil Service Cricket Club. The home team has been reasonable with the ball in hand, but their batting has looked lacklustre, to say the least. Andy Balbirnie’s men will be looking to salvage some pride.

The pitch in Belfast during the previous game turned out to be quite helpful for the bowlers. The pacers got seam movement from the surface and the spinners extracted prodigious turn as well. Batting second should be the way forward as 13 out of the 17 games at the venue went in favour of the chasing teams. The conditions will be cloudy, but with no chances of rain.

Quinton de Kock came into the T20I series on the back of a stupendous century in the third ODI at The Village in Dublin. However, he hasn’t quite been able to replicate the same form in the T20I series. In two matches thus far, the left-hander has scored 47 runs at an average of 23.50. A strike rate of 162.06 means that he has been able to give his team brisk starts at the top.

Tabraiz Shamsi has been outstanding in recent times. The left-arm wrist-spinner is currently the leading wicket-taker of the series with seven wickets from two games at an average of 5.85 and strike rate of 6.8. Moreover, his economy rate of 5.12 suggests that he has been able to keep the batters in check. Ireland need to play him with utmost care in the next match. 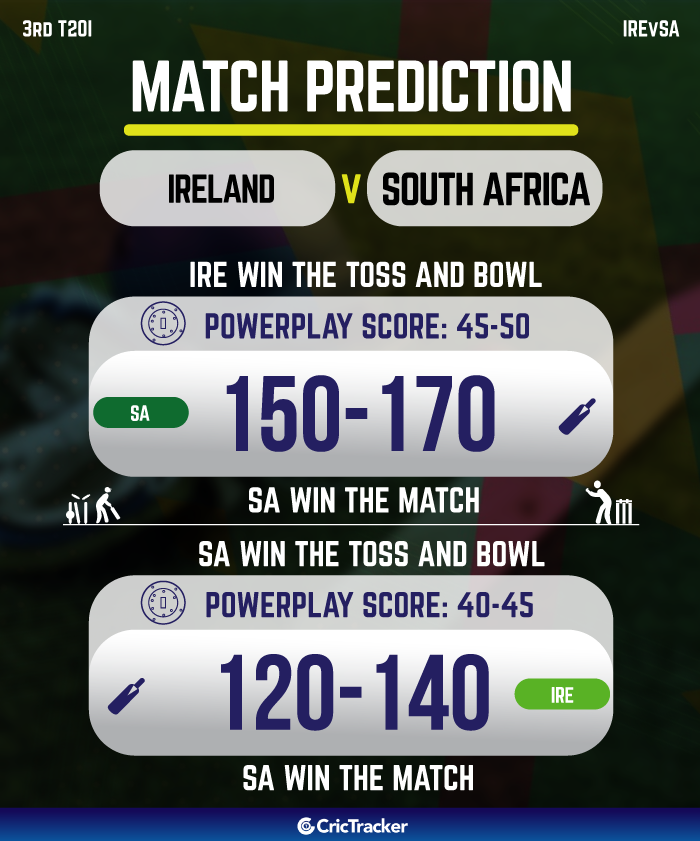