Britney Cooper has been named as the replacement for Deandra Dottin.

Ireland Women will host Windies Women in a 3-match T20I series starting on Sunday at the YMCA Cricket Club ground in Dublin. This will be Ireland Women’s first International assignment since the T20 World Cup last year held in the Caribbean Islands. The tournament witnessed the retirement of as many as four senior Ireland players – Cecelia Joyce, Isobel Joyce, Ciara Metcalfe and Clare Shillington. As a result, a total of six uncapped players named in their 13-player squad.

Ireland lost each of their previous five T20I matches including all the four they played at the WT20. Windies and Ireland teams made their respective Women’s T20I debuts when they faced off in the Dublin T20I in 2008 but never met again in this format. On the other hand, the Windies Women will miss the services of Deandra Dottin who was their top performer during the T20I series held in Pakistan this year.

The first game of the 3-match ODI series between Ireland Women and Windies Women will be hosted by the YMCA Cricket Club in Dublin.

There live streaming of this game is available on Cricket Ireland’s Social Media Accounts.

The YMCA Cricket Club in Dublin has usually recorded totals around 140 which is a par total in Women’s T20I cricket. Even Ireland has managed to post 130+ at this venue quite often while batting first against the big teams.

The Windies bowlers Shakera Selman, Afy Fletcher and Shamilia Connell are going to be crucial in fantasy cricket during this series. Selman and Fletcher bagged three wickets apiece in the recent T20I series against Pakistan while Connell claimed four.

The top all-rounders from both sides in this game – Stafanie Taylor, Hayley Matthews, Kim Garth and Laura Delany are ideal for multipliers. Hayley and Garth are the most important ones given their batting position and chances of a decent number of overs with the ball. 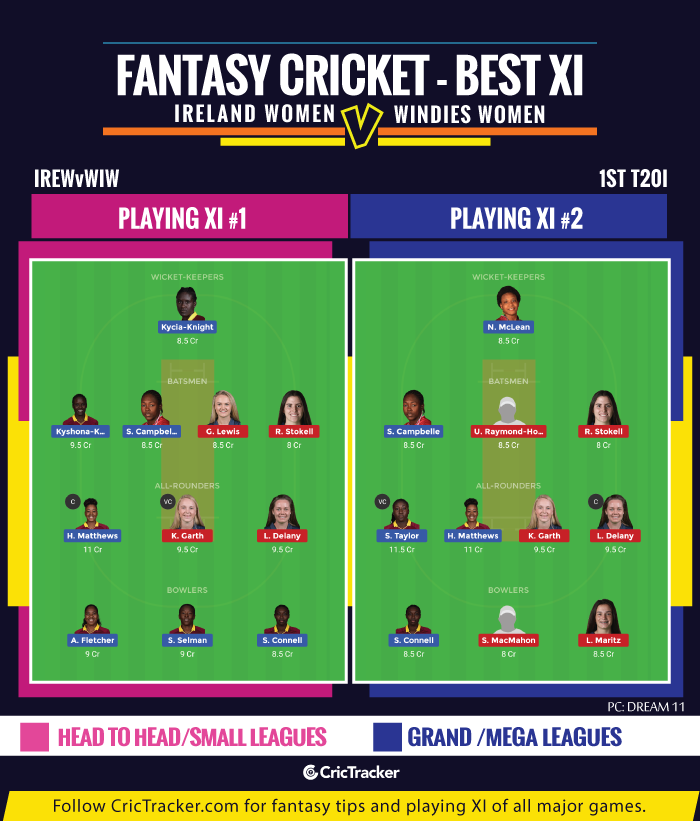 The Windies skipper Stafanie Taylor is the costliest player in this game as she is valued at 11.5 credits. In the current form, picking her will be a risky move as her price blocks your ability to pick some worthy players among bowlers and batters.

Windies Women are expected to cruise through in the game to take a 1-0 lead.