Paul Stirling has hit 2 half-centuries in his last 3 matches.

Islamabad United will take on Lahore Qalandars in the 12th match of the PSL 2022 on Saturday. With unreal hitting from Paul Stirling, Colin Munro and Azam Khan, Islamabad United recorded 229 runs on the board in the last game against Quetta Gladiators, and later 5 wicket haul from Shadab Khan helped them to seal the game by 43 runs. They bad deep which allows them to play fearless cricket. With 2 wins and a loss, they are at 2nd spot in the standings with 4 points.

After losing their 1st match against Multan Sultans by a mere margin, Lahore Qalandars made a strong statement with successive wins over Karachi Kings and Peshawar Zalmi. They played a good brand of cricket which is shown in the results. They need to keep the same tempo going for the rest of the tournament.

It’s a dead batting wicket where the batters can come in and whack from the ball one. The team’s batting first has a good record of winning the recent matches and hence batting first is a good option.

Playing in his first game of the tournament, Colin Munro straight away came in and scored a sensational 72* runs from just 39 balls against Quetta Gladiators, his knock comprised 3 fours and 5 sixes.

Fakhar Zaman is in the brutal form at the moment, including one century and 2 half-centuries, he has hammered 248 runs in 3 matches in this tournament at an average of 82.66.

Shadab Khan is showing his true all-round skills in this tournament. Islamabad skipper has scored scalped 6 wickets at an economy of 7.08 and scored 100 runs in 2 innings.

David Wiese is an effective all-rounder in this format of the game. In 3 matches in this year’s PSL, he has scalped 2 wickets and scored 13 runs with the bat.

Though Hasan Ali has conceded plenty of runs in this tournament, he has managed to pick up 5 wickets at an economy of 11.33.

Shaheen Afridi has been fabulous with the ball for Lahore Qalandars, he has scalped 6 wickets in 3 matches at an economy of 7.5 with the best figures of 3 for 40.

Azam Khan hit some big sixes in his innings of 65 runs in the last game against Quetta Gladiators. He is a powerful striker and a good pick for your fantasy teams.

ISL vs LAH Must Picks for Dream11 Fantasy Cricket: 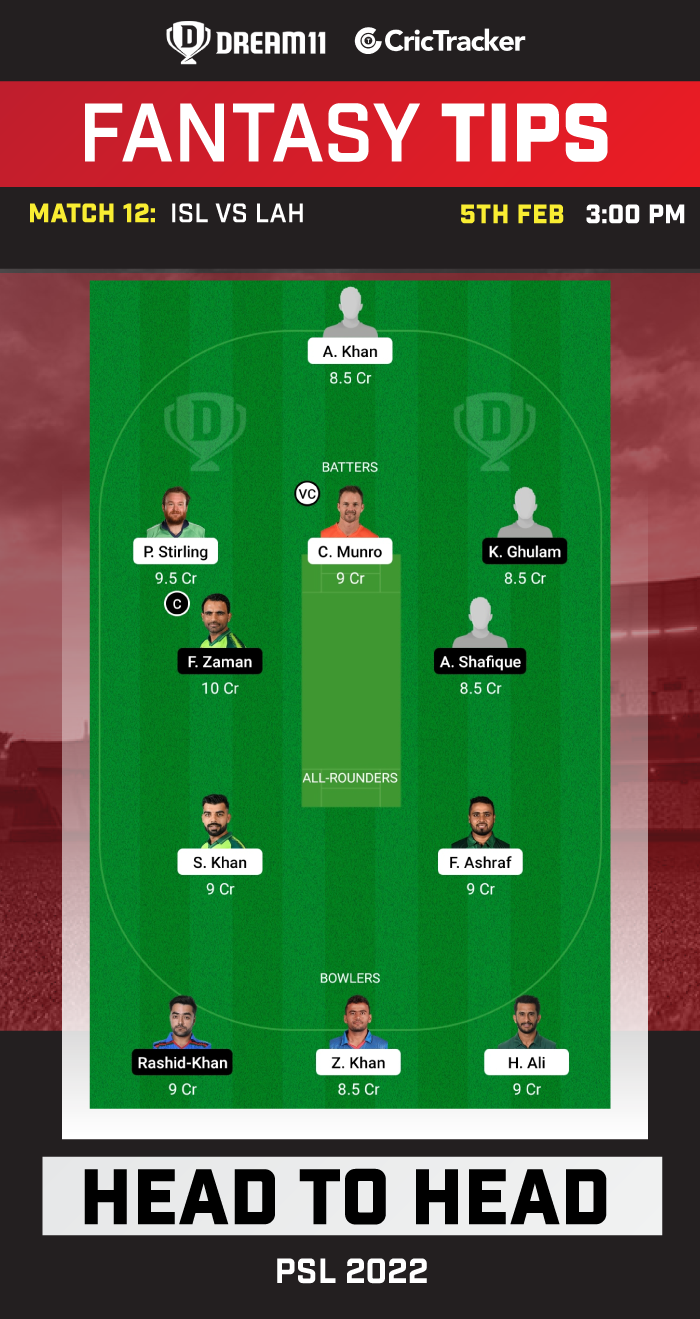 Alex Hales has scored 127 runs in 3 innings in this tournament at an average of 63.5. He has got a wide range of shots and a risky captaincy pick for your fantasy teams.

Rashid Khan is becoming a genuine all-round cricketer, he has scalped 3 wickets and scored 39 runs with the bat in this tournament. It’s worth a risk and you can pick him as your fantasy team skipper.

Zeeshan Ashraf bats down the order and his chances of scoring big runs are less and hence it’s better to avoid him while making your fantasy teams.