Guyana Jaguars are expected to win this match.

The 7th match of the Super50 Cup 2021 will be played between Jamaica Scorpions and Guyana Jaguars on 14th February at Coolidge Cricket Ground in Antigua.

Match 7 of the Super50 Cup will see the Jamaica Scorpions face-off against the Guyana Jaguars on Sunday. The Scorpions lost their opening game and will be looking to get off the mark with a win in this encounter. The Jaguars, on the other hand, have won both their matches so far and have 8 points to their name. Unsurprisingly, they are the favourites to win this game.

It will be cloudy in Antigua on Sunday but there are no chances of rain during the match.

The pitch has been a belter so far in this tournament. The chasing teams have won most of the matches and the scores over 300 have also been gunned down. Expect the team winning the toss to bowl first.

Brandon King missed out on his ton in the previous game but is in very good form. Rovman Powell scored 43 runs in the last game and seems to be in good touch. Leon Johnson already has scored a century this season and will be keen on making up for a failure in the last game. Shimron Hetmyer and Gudakesh Motie are the other two top picks for this match. 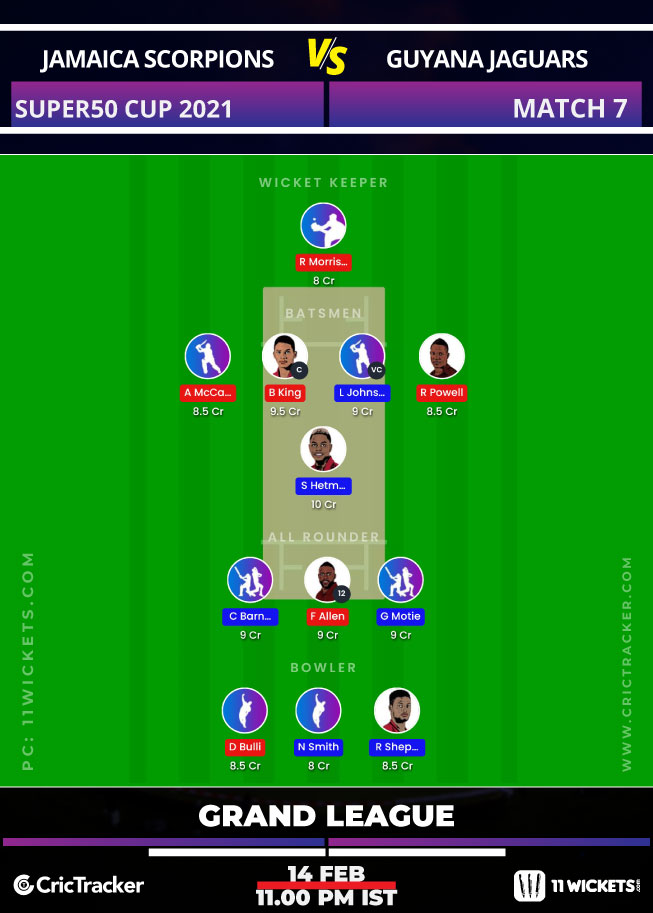 As pitch will be very good to bat, it is advisable to pick as many as five batsmen in your Fantasy team.

Guyana Jaguars are expected to win this match.