Apart from Indrani Roy, it is advisable to pick more all-rounders.

The 19th match of the Jharkhand Women’s T20 Trophy 2021 will be played between Ranchi Roses Women and Bokaro Blossoms Women on 24th February at JSCA International Stadium Complex in Ranchi.

The match is scheduled to start at 10:00 AM local time and IST and it will be streamed live on Fancode.

Ranchi Roses will go one-on-one against the Bokaro Blossoms in the 19th match of the Jharkhand Women’s T20 Trophy 2021 on Wednesday. The last time these two teams met, they had a cracker of a match but finally, Bokaro Blossoms managed to beat Ranchi Roses by 2 wickets. Ranchi Roses is at number three in the points table and this win can put them at the number two spot just behind Bokaro Blossoms.

On the other hand, Bokaro Blossoms is at the top of the point table. They have won all their 6 matches (except one with no result) and want to continue the winning streak. Bokaro Blossoms are fully aware of Ranchi Roses’ strength who are eager to take the revenge of last match.

According to the weather forecast, it is expected to be a clear sky in Ranchi on Wednesday with a temperature of 31 degrees Celsius. There is no chance of precipitation for this match.

This pitch is expected to be helpful for the bowlers especially the spinners. The average first batting score is 103 but still whoever wins the toss, will go for bat first as the pitch is very difficult to bat on as time passes.

Indrani Roy is the most consistent and the leading run-scorer in the tournament so far. She is in fantastic form and has scored 364 runs in 7 matches with a strike rate and an average of 125+ and 50+ respectively. In the last match itself, she scored 64 runs with a strike rate of 128.

Arti Kumari is one of the consistent bowlers in the Bokaro Blossoms team. In 7 matches, she has already picked up 11 wickets with an economy rate of 2.71. She is a good pick.

Bokaro Blossoms’ Ritu Kumari is a key all-rounder for her team. In the last match, she made not out 21 runs and picked up a wicket as well by bowling at an economy rate of 6 to help her team in scalping a 10 wickets victory.

Nidhi Buley is the most economical as well as leading wicket-taking bowler for Ranchi Roses. She scalped 8 wickets in the last 5 matches and can also score some crucial runs with the bat. She is one of the best all-rounders picks for your team.

Monika Murmu is another fantastic all-rounder for Ranchi Roses in this season so far. She has scored 131 runs in just 4 innings at a strike-rate of 99+. She has also picked up 9 wickets so far in the tournament. 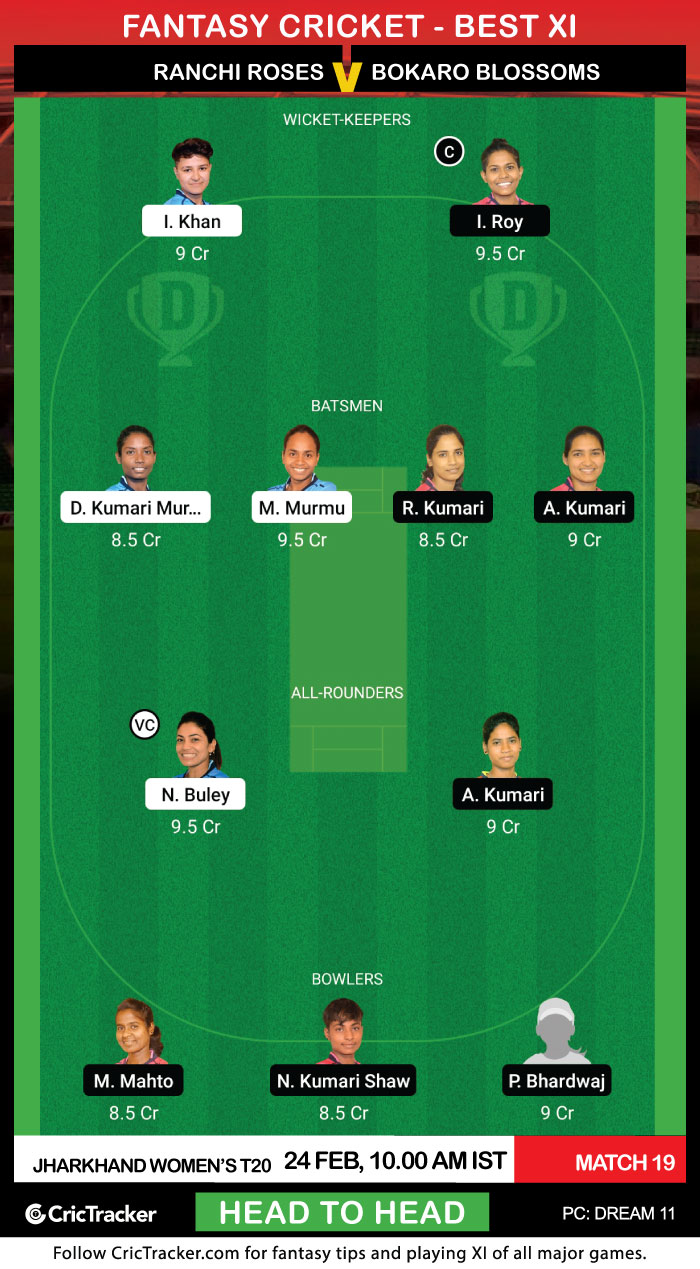 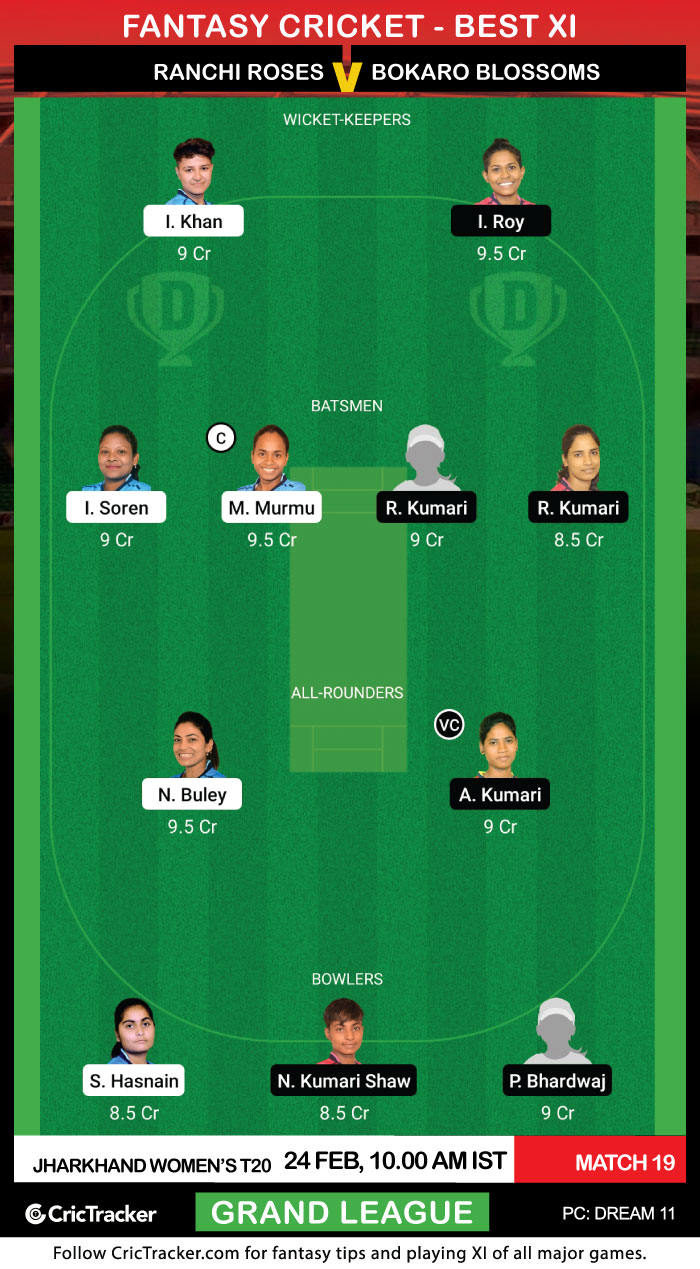 Apart from Indrani Roy, it is advisable to pick more all-rounders. Arti Kumari, Monika Murmu, and Nidhi Buley have given all-rounder performance consistently for their respective teams. Indrani is the most consistent performer in this tournament. She has scored big in each and every match.

Bokaro Blossoms Women are expected to win this match.