Rahul, after his 132* against RCB, must be brimming with confidence. 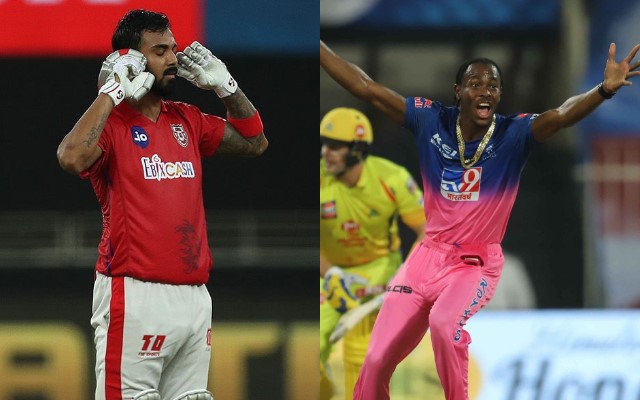 Rajasthan Royals will take on Kings XI Punjab at the Sharjah Cricket Stadium and there will be one contest to look forward to in the match on Sunday- Jofra Archer vs KL Rahul. It’s going to be one mouth-watering faceoff that no hardcore cricket fan should miss.

Both of them are at the top of their game and are one of the most vital members of their respective teams. The fact that both of them had a fabulous outing in their previous matches makes this contest even more exciting.

The Royals have played just one match in IPL 2020 so far and they were clinical against the three-times champ Chennai Super Kings (CSK). Unsurprisingly, Jofra Archer had a big role in the victory.

Archer was not only brilliant with the ball but also with the bat; his eight-ball 27* proved to be the turning point in the match. In terms of bowling, as expected, the England speedster was bang on target and finished with a figure of one for 26 in his quota of four overs.

KL Rahul or Jofra Archer- Who will have the last laugh?

KL Rahul was the showstopper in the match against Royal Challengers Bangalore. After an unlucky defeat in the first match against Delhi Capitals (DC), Kings XI Punjab needed a win to get their campaign going and they just did that with an emphatic win.

The Punjab skipper lit up the Dubai International Stadium with some breathtaking stroke-play as he made a record-breaking 132* off just 69 balls. Rahul showcased classical yet destructive batting and cleared the big boundaries of Dubai with ease.

The contest between Jofra Archer and KL Rahul becomes really interesting one because of the venue. The Sharjah Cricket Stadium is a graveyard for the bowlers and it was evident in the last match that was played, where 416 runs were scored and 33 sixes were hit.

The pitch is flat as a highway and the stands are of matchbox-size which makes for an apt hunting ground for a batsman like KL Rahul.

But here is a bowler, who, even on such a batsman-friendly pitch, spent runs at just 6.5 economy rate. That’s Jofra Archer for you, who was very hard to get away against CSK in the previous match.

So a batsman at the peak of his form is up against a bowler who is spitting fire wherever he plays. It is going to be the round one of the Jofra Archer vs KL Rahul and boy, it is going to be an epic battle to watch.