Rishabh Pant is one of the important players for India during the England Test series.

India wicketkeeper-batter Rishabh Pant is back after successfully recovering from COVID-19. The southpaw was detected positive for the virus on July 8 and since then was isolating at a relative’s place. But after the mandatory RT PCR test was carried out by BCCI, the 23-year-old returned with negative reports and joined the team in Durham.

With India gearing up to face England in a five-match Test series starting on August 4, Pant again managed to come in news for sporting a new and dashing look. Known to be always on point in the style department, the southpaw this time was seen wearing causals and also sported glasses. India opening batter Rohit Sharma who is known to be close friends with Pant posted this impressive picture of the southpaw on his official Instagram account.

Apart from being known as a good puller of the ball, Sharma is also known to be sarcastic, witty, and street smart with his replies and comments. And this time too, the 34-year-old gave a fitting caption to the post of Pant by saying: We have our own Badshah here. Sharma wrote giving two emojis too to it. 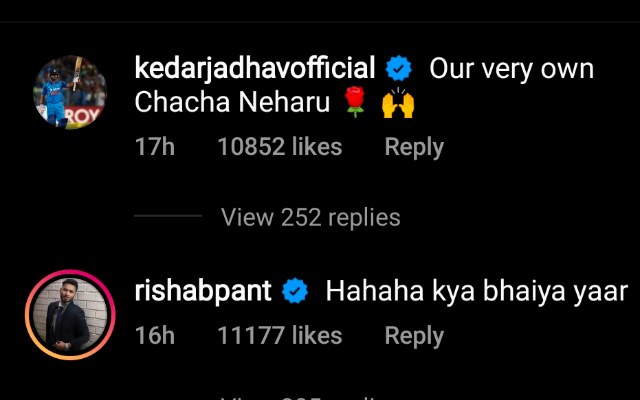 As soon as Sharma’s post went viral, fans started to flood with comments. But among them, two replies stood out that of Kedar Jadhav and Pant. In the picture posted by Hitman, his fans can see a rose on Pant’s attire, which caught the attention of India all-rounder Kedar Jadhav. He similarly based his comments that way and added: Our very own Chacha Nehru. He even gave a rose emoji at the end of the comment.

Sensing Sharma and Jadhav are making fun of him, Pant gave a fitting reply and answered: Hahaha Kya Bhaiya yaar. Which loosely translates in English (what is this brother).

On the other hand, the Indian team are gearing up to face England in a five-match Test series which will be part of the new World Test Championship (WTC) Cycle. India will be looking to make a good start in earn some valuable points during the five-Test matches.