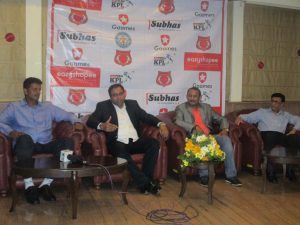 The Belagavi Panthers of Karnataka Premiere League (KPL) has a new co-owner which was formally announced on Thursday in a Press Conference at the M Chinnaswamy. Earlier, the team was owned by P R Nagesh of Subhas Enterprises, who has now found a partner and co-owner in Atul Srivastava of Gaames Merchandise Pvt Ltd. Begalavi Panthers is led by the best domestic captain of our country, Karnataka’s R Vinay Kumar and they have been two-time finalists in the 3 editions of the league.

Gaames Merchandise Pvt Ltd is the India’s largest athlete management agency and has agreements with more than 20 front-line cricketers who feature either in national team or in IPL. It is also the sole ICC Merchandise in the world with over 10 years of experience in cricket management. They are involved in talent management of players like Ajinkya Rahane, Ravichandaran Ashwin, Stuart Binny, Akshar Patel, Manish Pandey and many more. Gaames unlimited is the exclusive partner of Indian sub-continent to Masuri helmets as well.

The Panthers team was launched by the master blaster Sachin Tendulkar in 2009. They have retained Vinay Kumar and Abhishek Reddy in a quest to transpire to their maiden KPL glory. The Belagavi side is known for maintaining long-lasting and awesome player-management relations which played decisive role in prompting Atul Srivastava to consider Belagavi Panthers though he had quite a few offers at his desk.

Belagavi Panthers held trials yesterday to grasp young talented players from the grass root level and provide them with a wonderful opportunity to play alongside stalwarts of Karnataka in the fourth edition of the KPL. In order to nurture players from the district of Belagavi as well in Karnataka, Panthers have also held tournaments for like Save the tiger cup apart from promoting women’s cricket.

The Karnataka State Cricket Association (KSCA) President Ashok Anand was also present in the event. The KSCA president said, “I am very happy with the joining of Atul Srivastava as a co-owner in Belagavi Panthers. Last year, the final between Mysore Warriors and Belagavi Panthers was a really close match like the Indian Premier League (IPL) matches. We also got a very good coverage. The last three seasons have been good as we have got good response from people.”

“Last time around, Police didn’t let 3,000 to 4,000 people to enter the grounds. Cricket is the most important thing and Karnataka players are doing great as they are winning everything in domestic arena. KPL will also give a lot of opportunities to the youngsters. It’s a very good idea.” he added.

The format of KPL tournament is similar to that of IPL and the league is approved by Board of Control for Cricket in India (BCCI). The KPL has been played thrice in 2009, 2010 and 2014 respectively. For this season, the auction will be held on 25th July. This time round there will be a total of 8 teams playing the league and will have quite a few stars which includes the likes of Robin Uthappa, Manish Pandey, Stuart Binny, KL Rahul ,Vinay Kumar, Karun Nair, K.C Cariappa, Jagadeesha  Suchith, CM Gautam, Mayank Agarwal, Abhimanya Mithun, Bharat Chipli, Shishir Bhavane, Shreyas Gopal and many more.

The Organizers are excited at regaining the viewership and following they garnered during the previous season of the league. The final of KPL 3 had a robust viewership of 25.4 million around the world. The tournament will be played in Mysore and Hubballi from September 2 to September 18. KPL will be telecasted live on Sony Six.