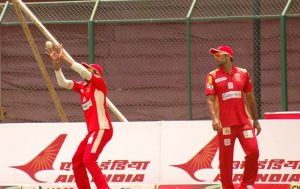 Hubballi, September 6, 2015: High on confidence after defeating defending champions Mysuru Warriors, Mangalore United will be riding the high wave when they take on Bijapur Bullls in the second match on Monday under lights at the Rajnagar Stadium here.

The Bulls managed to defend an under par score and will hope that their batsmen will come to the party and give the bowlers enough to defend.

The Bulls bowling came good, thanks to the two spinners KC Cariappa and veteran Appanna. These two shared six wickets between themselves and were miserly in their four overs respectively.

It is the batsmen who will have to focus on the job and deliver to plan. The team has the potential to trouble the best and to take on the best. Coach Yere Goud will have his hands full in digging it into his players the need for consciousness.

Mangalore United will once again hope their top order will flourish and expect fireworks from the middle and lower order as happened in their last outing. Added to that, they will expect spinner Mitrakant Yadav to once again bowl them through the contest as he did with a four for against Mysuru.